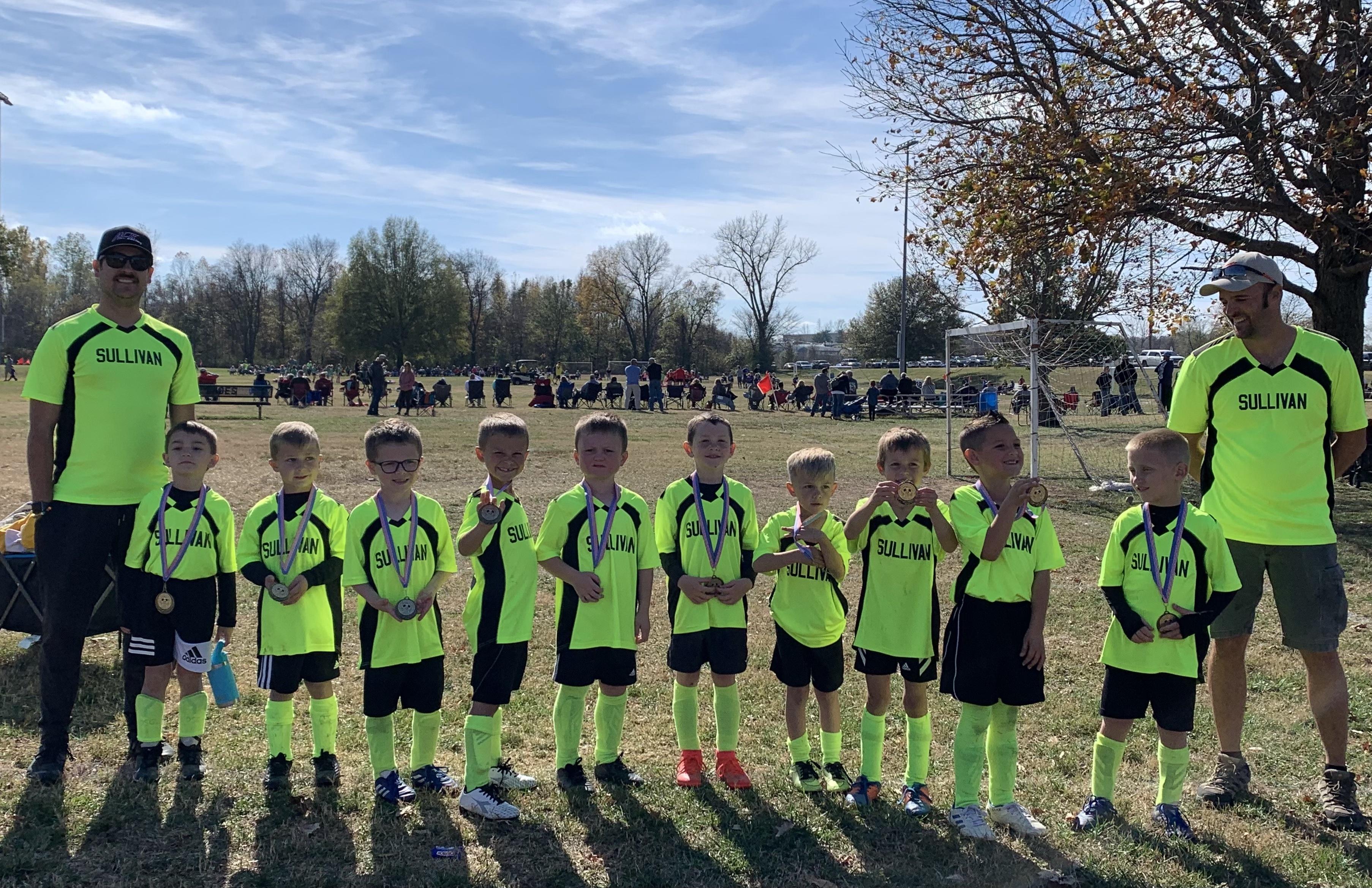 The 2022 Bank of Missouri Fall Cape Classic recreational tournament was underway November 5-6th in Cape Girardeau.  Cape’s beautiful, 14-field Shawnee Sports Complex hosted a whopping 108 teams, seven of which were from our own Sullivan Soccer league.  For the past three years, our coaches have found this regional tournament successful for their players, and with an overall record this season of 13 wins, six losses, and one tie, it was no different.

The Screaming Eagles Kindergarten team was coached by Brea & Jacob Lambert and Kevin Ijames Jr.  While the tournament does not keep standings for this age group, the boys had a great time. They received medals for participating in the coed division.  The boys were competitive in all games due to defensive performances by Kevin Ijames III, Weston Sappington, Tyson Schatz, Henry Todd, and Collin Voss.  Offensive plays were led by Deacon Alexander, Jack Bunk, Weston Isenagle, Ezra Lambert, and Charlie Reinhold.

The 5th/6th Eagles boys team coached by Matt Isgriggs consisted of boys from 3rd to 6th grade.  They successfully worked their way to the semi-finals game with a 4-1 win over Salem Bobcats.  Their run ultimately came to an end after a loss in the semi-finals. The Eagle’s determination and effort were not undermined by the loss but highlighted by their ability to compete in a division where most players were a division older.  This young team consisted of Adyn Bowen, Jace Bradford, Wesson Branson, Easton Crump, Truman Davis, Greyson Griffin, Sam Hulsey, Kelston Isgriggs, Isaac Levine, Kaleb Perry, Cole Rosenzweig, Wesley Schmidt, Ashton Strosnider, Cameron Strosnider, and Kason Stout.

The Lady Eagles’ 5th/6th girls, coached by Eric and Kelly Roberts, having competed together in this tournament before, had high expectations.  The team came out firing on all cylinders Saturday morning to beat Marion, IL, by 4-0.  Saturday’s second game was a spirited contest against a tough Cape Girardeau team.  The Lady Eagles took a 2-1 lead but ultimately lost 3-2. The girls regrouped and beat a very physical team from Poplar Bluff 3-1 on Sunday morning, sending them to the championship game.  It was another highly competitive match against the same Cape team.  Although they had a decided advantage in shots and possession, they fell 1-0 in a heartbreaking loss.

Sullivan Soccer would like to thank the extraordinary parents of these athletes for being true representatives of Sullivan’s competitive nature while exhibiting excellent sportsmanship.  To our athletes, your coaches and parents are incredibly proud of the loyalty, grit, determination, compassion, and perseverance you demonstrated this weekend.