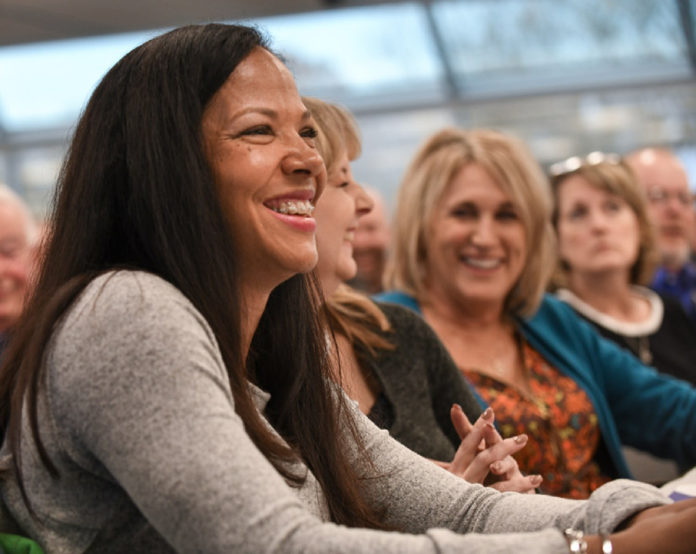 After going virtual last year, the spirit of Jefferson City’s annual Prayer Breakfast has been revived.
Lively chatter filled a packed room at the Missouri Farm Bureau on Wednesday morning for the 42 annual Prayer Breakfast — an event that was sorely missed by many when it was hosted online last year.
The breakfast is organized by the Jefferson City Area Chamber of Commerce’s Cole County Communities Committee, which helped serve the breakfast alongside volunteers from Blair Oaks High School FFA.
Gathered for some eggs, coffee, and biscuits and gravy, attendees heard from KRCG’s Rod Smith, state Sen. Mike Bernskoetter and John Moseley, Lincoln University’s interim president.
John Christman, executive director of Calvary Lutheran High School, led the group in prayer and shared a passage from the Book of Philippians, Chapter 4.
Throughout the morning, there was an undeniable sense of relief to be back in person and together as a community.
“I look out at this crowd, and this is the best looking crowd we’ve had. Last year, I didn’t see a crowd at all,” Smith quipped in his opening remarks.
Both Bernskoetter, the event sponsor, and Moseley, the keynote speaker, touched on the overwhelming charity and philanthropy found throughout the Jefferson City community in their remarks.
Despite the COVID-19 pandemic and various other obstacles in recent years, Bernskoetter said the community never misses the opportunity to display care and concern for one another.
“Everybody’s more connected than ever, but it seems like we’ve lost that sense of community,” Bernskoetter said. “But not here in Jeff City. We have a great community of people who always come out to support anything that the people are interested in.”

John Moseley received an extended standing ovation after his keynote speech at the 42nd Annual Prayer Breakfast on Wednesday, Nov. 24, 2021, during which he talked about very personal topics involving him and his family and how his faith in God has been instrumental in getting through the tough times.

In the spirit of community, Bernskoetter commended Moseley’s efforts to make Lincoln University a more integral player in the Capital City and expressed his support for dropping the university president’s interim title.
Moseley said the annual Prayer Breakfast is like the community’s family reunion — a time for various groups, organizations and individuals to catch up and share stories.
And that’s exactly what he did.
In his address, Moseley shared his life journey through the lens of the question, “Where do you see God in your life?”
Through personal hardships and pain, as well as unparalleled joy and happiness, Moseley said God led him to Jefferson City and his current role as Lincoln’s leader.
“I never would have imagined loving a place as much as we have,” Moseley said. “Crystal and I have been fortunate to have lived in a lot of great places. Towns are towns, cities are cities, buildings are buildings. But the people make communities. And the people here are about as good as anywhere you’ll find anywhere in this country you go.”
Moseley pointed to the community’s support for a wide variety of charitable causes and its ability to meet the needs of others as evidence of its good nature.
Gary Plummer, president and chief executive officer of the Jefferson City Area Chamber of Commerce, said the event has been a long-standing, heart-warming tradition, and that hasn’t changed.
Plummer, who was experiencing the breakfast for the first time after a 25-year break, said it brings back a flood of memories.
“This event is the same event I remember us doing,” he said.
The revival of an in-person gathering brought approximately 220 people to the prayer breakfast, Plummer said.
Shaun Sappenfield, existing business manager with the chamber, said Wednesday’s turnout speaks to the popularity of the event and the desire to get back to in-person gatherings.
Sappenfield said the prayer breakfast also helps to kick off the holiday season’s long list of community events.
Greg Gaffke, who has served on the Cole County Communities Committee for about 20 years and helped serve food Wednesday, said it was nice to see so many different parts of the community come together and wish them a happy Thanksgiving.
“It’s great to see everybody out this morning after what we’ve gone through the last few years — it’s really gratifying to see a good turnout,” he said. “Everybody comes in with a smile, but what’s really nice is to see people that you maybe haven’t seen in two years because of (the pandemic), and it all works out well.”