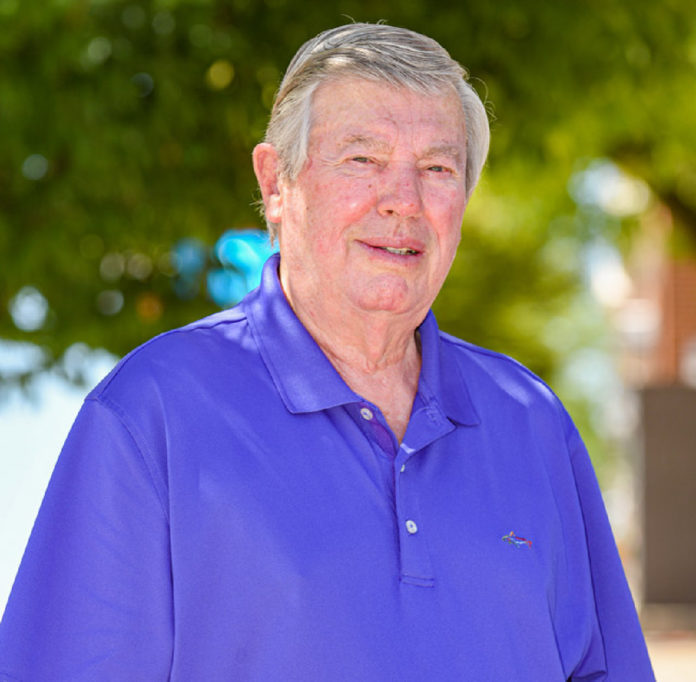 Helping strangers in need is simply second nature for Bill Graham.
After 40 years working at State Farm, Graham retired in 2002 and knew he needed something that would keep him working with people. It was around the same time that ticket agents were removed from local Amtrak stations to cut costs, and local volunteers formed the Capital City Amtrak Friends group to make sure there was someone there to greet Amtrak passengers and provide assistance if necessary.
Graham and his wife, Alice, quickly became familiar faces at the Jefferson City Amtrak station. The couple regularly manned the stop Wednesday mornings and evenings for years, and have a collection of memories of the different people they’ve met and helped as they arrived in Jefferson City.
“Evening seemed like it always had more people needing help,” Graham said. “And you just help them.”
Graham received the Fisher Family Good Samaritan Award on Saturday. Redemption Inside the Walls and News Tribune partnered for the second year to select five “good Samaritans” who have gone above and beyond to help the Mid-Missouri area.
Throughout the years, Graham has helped a variety of people arriving in Jefferson City by train, whether it’s giving a ride to a further destination or even helping find a place to stay for the night.
“A lot of students came in and they were supposed to have someone pick them up and they didn’t,” Graham said.
Graham has always been willing to give someone a ride, whether it’s to Columbia or the Lake of the Ozarks, though he noted he never rides alone in a vehicle with the women needing transportation, opting to first pick up his wife if she’s not already with him.
When asked what stories stand out from his time as a volunteer, Graham and his wife quickly recalled several, including one of a young homeless woman who had decided to come to Jefferson City from Kansas City. Graham saw her sitting alone at the station near the end of an evening shift and took her to the Salvation Army, where she was able to stay for a few days.
“We send a lot of people there,” Alice Graham said.
During a morning shift one day, Graham recalled, a young man from Romania arrived, expecting transportation to the Lake of the Ozarks, where he had a job waiting for the summer. The ride had not shown up and Graham didn’t hesitate to offer to take him there himself, stopping for lunch first and getting to know him along the way.
“It takes a lot of courage,” Graham said of moving to a new country without fully knowing the language or having connections there.
After getting to the lake, Graham gave the man his name and phone number, telling him that if the job didn’t work out, get in touch. Three days later, the Romanian man called and Graham headed back to the lake to pick him up. It’s one of the only times the Grahams broke their own rule and let a stranger stay in their home. (When someone arrives needing a place to stay and they can’t go to the Salvation Army, Graham has provided funds for a motel room.)
Graham said he then helped the young man, who had become homesick, get up to Chicago to eventually catch a flight back to Romania, even paying for a hotel room there.
“He had a heck of an experience,” Graham said.
Another story Graham recalled was giving a young woman a ride to her home in Camdenton. He noted a lot of people who arrive by train don’t have much money, and he doesn’t give much thought to helping where he can.
“It’s just things like that,” Graham said.
Alice Graham quickly added her husband does things like that for people outside of the train station whenever he encounters those in need. He then told two different stories of helping strangers he encountered at different places who had become stranded after fights with their significant others while away from home.
“I said, ‘Next time, you have a fight with your boyfriend, you better be closer to home,'” Graham said with a chuckle.
Collecting all these stories has given Alice Graham some interesting things to share with the group she quilts with on Thursday mornings, which is what ultimately led to Graham’s nomination. He said he was quite surprised to find out he was nominated.
“It’s a good feeling,” Graham said.
The other four Fisher Family Good Samaritan Award recipients are: Alicia Edwards, Connie Cashion, Chris Jarboe, and Jeff Brondel.

Show Me MO News Reporters - October 20, 2021
0
This story originally appeared in the Friday, Sept. 25, 1931 issue of The Farmington Press. – EditorBurlin Yates and Charles Vincel, co-captains of the...
© Copyright 2021 All Rights Reserved - Show Me Missouri News - As Amazon Associates we earn from qualifying purchases.
MORE STORIES