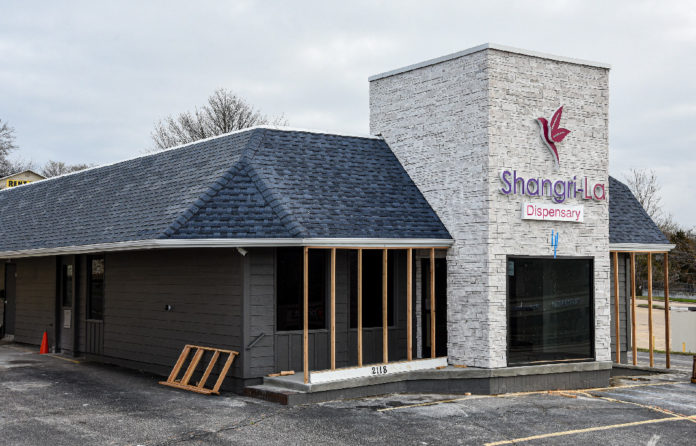 Jefferson City’s second medical marijuana dispensary is almost ready to open.
Shangri-La Dispensary at 2118 Missouri Blvd. has an exterior that looks ready to attract customers, but it’s still expected to be a few days before the doors officially open. Nevil Patel, CEO of Shangri-La Dispensaries, which also has two locations in Columbia, said they have one piece left to finalize that he hopes to finish early next week in order to open.
Patel is not new to running a business, and he’s not new to Jefferson City. His parents once owned a gas station on Fairgrounds Road, where Patel helped out while he went to Lincoln University. His wife, who co-owns Shangri-La Dispensaries, is a Jefferson City native and graduate of Jefferson City High School. She’s also a physician, Patel said, which is why they really try to keep the focus of the business on medical care.
“We truly are medical-focused,” Patel said, explaining the company employs a “cannabis nurse,” who he described as “extremely knowledgeable” and ready to help patients as they explore the medical benefits of marijuana.
The company also has pharmacists available for patients, in addition to the front staff, who Patel said have been through an intense training process above state requirements. Patel said those initial staff members have already been hired and trained, but he anticipated doing another round of hiring in about 15-30 days.
Given the stigma of marijuana for many patients, especially older people who have never tried it before, Patel said the business is really striving to make sure each patient is completely comfortable with the product they walk out with, and that may mean spending a lot of time going over things first.
The first medical marijuana dispensary to open in Jefferson City was Missouri Health & Wellness, which opened at 1404A Missouri Blvd. at the end of January.
Patel said he hopes to open the doors for the first day of business Friday, but that could change. Once the doors open, he said they will stock pre-rolled, flower, vape and edible products, but he noted more variety would be introduced in about two to three months, as cultivators are able to branch out and provide other items, such as concentrates and topicals.
Once the doors officially open, Shangri-La will be open from 10 a.m.-7 p.m. Sunday through Thursday and 10 a.m.-9 p.m. Friday and Saturday. To learn more about the dispensary, visit shangriladispensaries.com.
Know of any business happenings around Jefferson City? Let us know at [email protected]