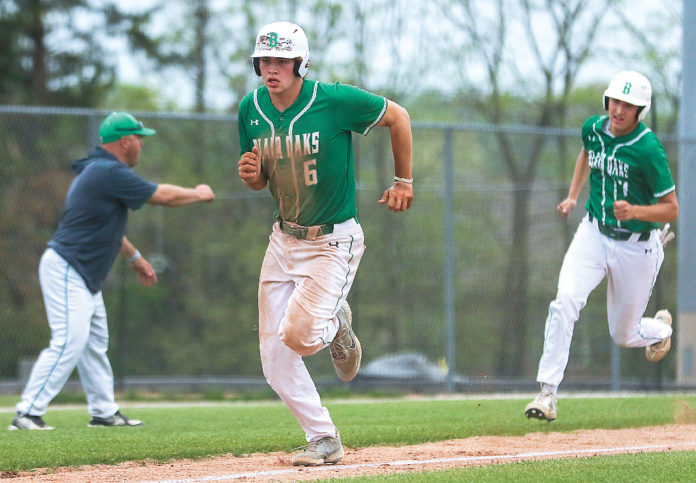 The Blair Oaks Falcons never trailed Tuesday night, but there was nothing easy about their matchup against the Helias Crusaders.
The game started as a pitchers’ duel, then had a few sloppy moments in the middle innings before a Helias comeback made for a close finish. But Blair Oaks was able to hang on for a 9-7 win at the American Legion Post 5 Sports Complex.
“When you’re playing Helias, you have to compete, because they competed their butts off the whole game,” Blair Oaks coach Mike DeMilia said. “We left some opportunities on the field, and we could have been a little more comfortable there, but to still finish it off, our guys showed some heart and focus.”
After going more than a decade without a win against Helias, Blair Oaks won both meetings this season against the Crusaders.
Neither team could score in the first two innings, with Nate Roark on the mound for Helias and Cale Willson pitching for Blair Oaks. Roark exited after two innings in a bullpen by committee outing for the Crusaders’ pitching staff.
“Our important game this week is Friday,” said Helias coach Chris Wyrick, who used Tuesday’s start as a bullpen session for Roark ahead of Friday’s rivalry game against Jefferson City. ” We got him 30 pitches and we were going to try and piece it together.”
Blair Oaks got on the scoreboard first in the top of the third inning. With two outs, Wil Libbert lifted a fly ball to left field, but a defensive miscue allowed the ball to drop for an RBI double. Ian Nolph followed with an RBI single to put the Falcons ahead 2-0.
“We got a little lucky there,” DeMilia said. “We scored two runs that probably shouldn’t have scored, but we’ll take it.”
The first four Blair Oaks batters reached base in the fourth, leading to two more runs. However, after another Helias pitching change, David Hofherr worked out of a jam with runners on second and third base and no outs, stranding both runners to keep the score at 4-0.
“We had a little momentum, he did a good job getting out of that,” Wyrick said.
Willson only allowed one hit in 4 innings against the Crusaders, but Helias manufactured a pair of runs in the fourth. Jacob Weaver scored on a play at the plate, then Brandon Scheulen moved around the bases and scored on a wild pitch to make it a 4-2 game.
Willson threw 11 straight balls in the fourth inning, putting the tying run on base, but the junior right-hander answered with a strikeout and a groundout to end the inning.
“He put himself in that situation, but I’m proud of the fact that he was able to fight through it and get out of there,” DeMilia said of Willson, who evened his season record at 2-2. “He’s got great stuff. If he can throw it over the plate, he’s going to be tough to beat, but we’re still working on that.”
Blair Oaks responded with four runs in the fifth — all scoring with two outs — to push the lead to 8-2. After hitting a two-run double in the fourth, Lane Libbert followed that with a two-run single to center field in the fifth, giving him four RBI in the game. Hayden Salmons added an RBI single to give the Falcon a six-run lead, their largest of the game.
DeMilia shifted the top half of the batting order following last week’s loss to Fatima. The production was there Tuesday, as the Falcons’ Nos. 1-5 hitters had eight of the team’s 12 hits.
“Those guys came through there,” DeMilia said. “They got a couple of seeing-eye hits, and we did hit some balls hard, too, that were outs.
“Those two-out hits are the difference in the game most of the time.”
Helias’ big offensive inning came in the sixth. Pinch-hitter Quinton Baker drew a 10-pitch walk to get it back to the top of the lineup for the Crusaders.
“He did a good job, that was a really good at-bat,” Wyrick said. “I wonder where we would have been if we had more at-bats like that early on.”
Sam Schell hit an RBI single, Baker scored on a fielder’s choice and Weaver hit a two-run single to cut the Blair Oaks lead to 9-7.
Josh Isaacs came in the game for the Falcons and retired the final four batters he faced to get the save, posting two strikeouts.
“Josh has come a long way in the last two years, and I have a lot of faith in him,” DeMilia said. “He’s got good stuff and fills the zone up.”
Willson finished with seven walks and six strikeouts, while Cade Stockman followed with one walk and one strikeout in 1 innings.
“We took probably about 20 fastballs for strikes, and you can’t do that,” Wyrick said. “How many fastballs for strikes did Blair Oaks take? Less than 10. There’s the difference.”
Lane Libbert, Salmons, Reid Dudenhoeffer and Gavin Wekenborg each had two hits for the Falcons.
While Tuesday’s contest is a rivalry game, both Blair Oaks and Helias have bigger games on the horizon later this week.
Blair Oaks (16-4), ranked No. 5 in Class 4, will host Class 4 No. 3 Southern Boone (17-1) on Thursday with first place in the Tri-County Conference on the line.
The expected starting pitchers for that game are a pair of left-handers: Southeast Missouri signee Ethan Osborne for Southern Boone and sophomore Wil Libbert for Blair Oaks.
“That should be a great battle,” DeMilia said. “It’s what we play for. You want to be in big games like that.”
Helias (11-6) will host Class 6 No. 10 Jefferson City (14-9) on Friday, the first baseball meeting between the two teams as Central Missouri Activities Conference foes.
“We’ve got to put seven innings together,” Wyrick said, “and right now, we’re not capable of doing it. It’s my job to figure out how to get them to put seven innings together on both sides of the ball.”
Helias won Tuesday’s JV game 5-0 in five innings.