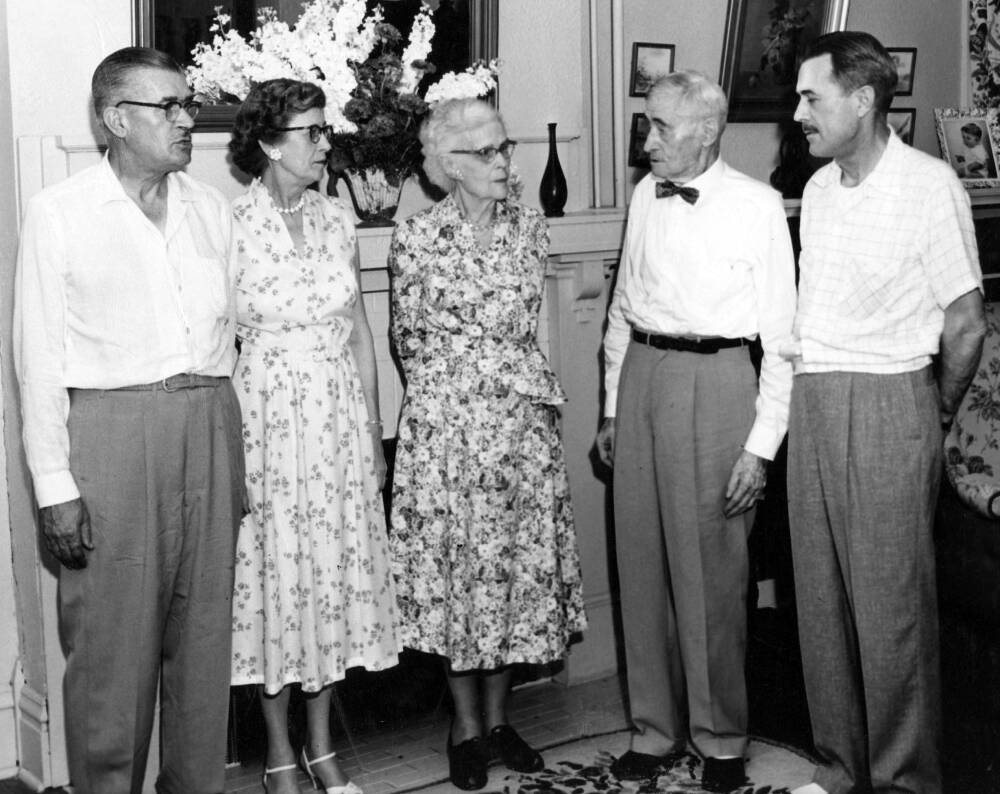 Last week’s blog about Albert Stone Duckworth’s gift of thousands of fossils to Southeast Missouri State University was actually prompted by an article I found about one of his sons, Herbert S. Duckworth, in a 1946 edition of the Southeast Missourian.

As I comb through that year’s newspapers on microfilm while doing my daily column, I’m always on the lookout for mentions of returning servicemen or those who elected to stay in the military after World War II. Specifically, I watch for mentions of my dad’s return to his family in Scott County, or Uncle Jim’s re-enlistment. So far, I haven’t lucked out with either. But I did come across this page one story about Capt. Duckworth, which notes he was the “first victorious American Navy man to set foot on Japanese home soil” in World War II and “raised the first American flag.”

Capt. Herbert S. Duckworth of Cape Girardeau, a veteran of 23 years of naval service, has been elevated to the command of the world’s largest fighting carrier, the U.S.S. Midway, which was recently completed at Newport News, Virginia.

The Midway’s new commander, a son of Professor and Mrs. A.S. Duckworth, 915 College Hill, who has been actively affiliated with naval aviation since winning his wings at Pensacola, Florida, in 1925, has served aboard a number of well known carriers and held other important aviation billets.

As leader of the naval air occupation force flying from the U.S.S. Cowpens to the naval air field at Yokosuka, Japan, in August 1945, Capt. Duckworth participated in the Japanese surrender.

Born at Keosauqua, Iowa, the 45-year-old skipper came to Cape Girardeau with his parents when he was 3 years old. His father is curator of museums at State College. He attended the college training school and high school and also State College. At the age of 17 he received his appointment to the U.S. Naval Academy at Annapolis and at the age of 21 graduated with the rank of ensign. He was then assigned to the Pacific Fleet for two years and received his advancement to lieutenant junior grade. He then took up naval aviation and won his wings at Pensacola. He was sent to Cuba and then became a flight instructor, serving several years at Pensacola and San Diego, California.

Two years prior to Pearl Harbor, he was assigned as an air officer on the carrier Lexington and was on that ship when it was sunk in a battle with the Japanese in the Pacific May 8, 1942.

He commanded the naval air activities in Tokyo Bay during this period and later took command of the carrier Cowpens, which was he first U.S. carrier to enter Tokyo Bay. He was relieved from duty Dec. 13. He is credited with being the first victorious American Navy man to set foot on Japanese home soil in this war and raised the first American flag. Capt. Duckworth has been presented with this flag and also a sword symbolic of the surrender of the Japanese forces at Tokyo.

After taking over the carrier Cowpens, Capt. Duckworth commanded the ship on three cruises back to the States transporting troops home.

The new carrier carries a normal compliment of 3,500 officers and men, and its beam is so great that it cannot be taken through the Panama Canal.

When elevated to the rank of captain early in the war, he was said to be the youngest officer of that high rank in the Navy.

Capt Duckworth’s family resides at Coronado, California. His wife is from Newport News. They have two children, Eloise Kilby, 18, and John Albert, 16.

A brother, Lieut. Comm. Samuel Duckworth, recently received his discharge from naval service at New Orleans and is now preparing to enter a dredging business in New Orleans. A nephew, Lt. Albert Steinbeck, is chief engineering officer aboard the destroyer Coney in the Pacific.

Two years before the death of their father, A.S. Duckworth, all three children returned to Cape Girardeau to help their parents celebrate their 60th wedding anniversary. The Missourian sent photographer G.D. Fronabarger to cover the event, and this photo was published June 25, 1956:

Herbert Spencer Duckworth retired from the Navy in 1952. Following in the footsteps of his dad, he was the president of the Jacksonville (Florida) Art Museum from 1956-58, according to The Star Press newspaper of Muncie, Indiana. He died May 29, 1990, and was buried at Arlington National Cemetery. He was survived by his wife, two sons and two daughters.

Ramona Duckworth Steinbeck was born April 7, 1897, in Keosauqua, Iowa, but was raised in Cape Girardeau. She married August Steinbeck June 6, 1917. A graduate of Southeast Missouri State Teachers College in 1931, she taught a number of years in Union, Missouri, and later joined her husband, a newspaper publisher, in that profession. She was a columnist and feature writer from 1947 to 1963 for the Franklin County Tribune. From 1951 to 1963, she was business manager of the Franklin Publishing Co., and from 1960 to 1963 she was editor of the Meramec Valley Transcript at Pacific, Missouri.

She and her husband moved to Boca Raton, Florida, about 1968, and she died there May 20, 1978. She was survived by her brother, Herbert; husband and two sons. She was buried at Cape County Memorial Park Cemetery in Cape Girardeau.

And, finally, Samuel B. “Sam” Duckworth was born in Cape Girardeau Oct. 26, 1902, and died March 8, 1974, in Lafayette, Louisiana. He was buried at Greenlawn Memorial Gardens in Lafayette.

Until his retirement in 1973, Duckworth was a construction engineer. During World War II, he served as a lieutenant commander with the Seabees.

Along with his brother and sister, he was survived by his widow and two daughters.