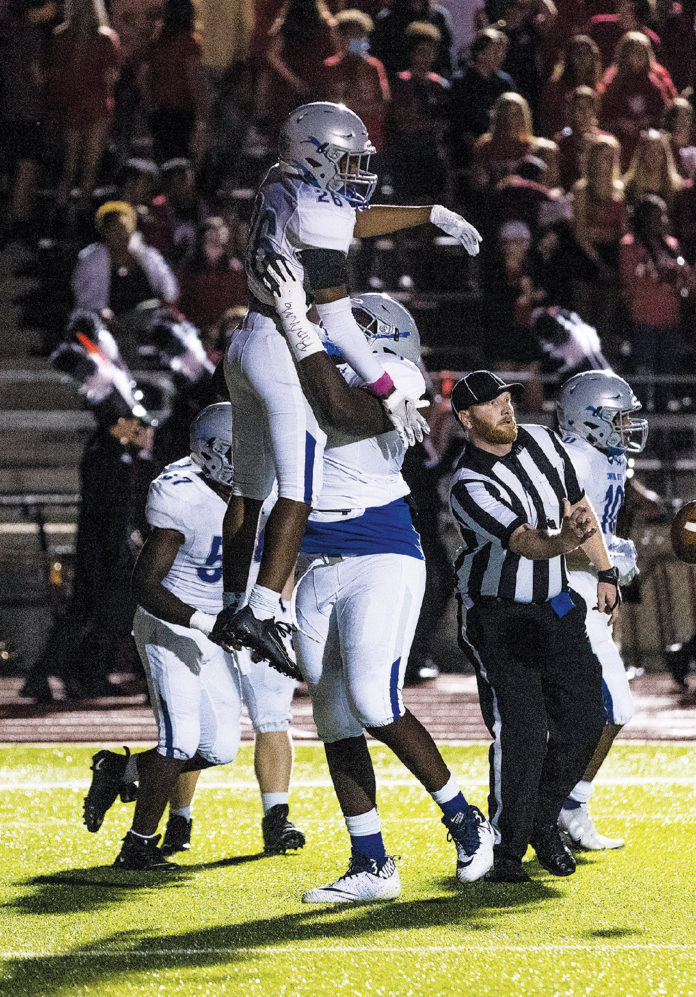 Wins are important, but Capital City coach Joe Collier has turned his focus to laying the foundation for a successful program in his first year at the helm.

Collier knows he needs to look no further than his team’s next opponent as a model of weekly and annual consistency.

The Cavaliers will stay in Jefferson City for a second straight week, this time in hopes of scoring a massive upset against defending Class 4 state champion Helias. Kickoff is scheduled for 7 p.m. today at Ray Hentges Stadium.

“They’re in the know across the board, and that’s where we’re trying to get,” Collier said of the Crusaders. “Whether they’re talented or not, they recognize things and are on the same page. They’re so well-coached and knowledgeable about what they need to do. That’s what makes them so good.”

Capital City (0-5, 0-3 Central Missouri Activities Conference) is coming off a a 42-7 loss to Jefferson City. Shoring up the run defense will be a priority for the Cavaliers after they allowed 35 second-quarter points, 345 yards and six touchdowns (five on runs of 41 yards or more) on 40 carries last week.

Helias comes in averaging a little more than 5 yards per carry. Seniors Ryan Klahr and Will Herrbold have split the workload evenly, while junior quarterback Drew Miller has stepped in admirably after three-year starter Jacob Weaver graduated.

After a blowout loss to Hannibal to start the season, Helias (4-1, 3-0 CMAC) has posted a four-game winning streak during which it’s averaged almost 40 points per game and has given up an average of 10.25 points per game. The Crusaders’ 34-13 road win against Rock Bridge last week put them in the driver’s seat for the conference title.

On the other side, Capital City comes in averaging less than 10 points per game (9.4) and has not thrown for more than 65 yards in a game since Week 2. The Cavaliers have thrown seven interceptions and no touchdown passes this season, while the Crusaders have recorded 12 sacks and seven interceptions defensively.

“Their D-line is really big,” Capital City’s Ian Nelson said of the Crusaders. “They’re not the quickest individuals, but they can cause real problems with their size. If our O-line can make some small gaps, those can turn into big plays.”

With senior Ethan Wood and junior Hurley Jacobs sidelined by injuries, Nelson filled an old role out of necessity last week. After rushing for more than 500 yards and three touchdowns last season, the running-back-turned-tight-end gained 67 yards on his first 11 carries of this season.

“It just felt like going back to my roots and the basics,” Nelson said. “I’m used to tight end by now, but playing fullback for a full season felt normal.”

“It was a no-brainer to put Ian back there with Ethan and Hurley out,” Collier added. “We initially wanted to get the ball in his hands out wide, but he’s a great back in his own right.”

Wood, the team leader in carries (69) and touchdowns (three) — missed last week’s game due to a lingering ankle injury. Collier said he is “questionable” for tonight.

Collier said Jacobs — who has not played this season due to an arm injury — is also questionable, but more likely to play than Wood. The team’s leader in carries (116) and touchdowns (eight) last year practiced all week in preparation for Helias.

“Getting Hurley back would help a lot defensively and offensively in the run game,” Collier said. “But we may limit him to see how he’s playing. I know he’s been lifting and conditioning, but there’s a difference when you’re going up against other people.”