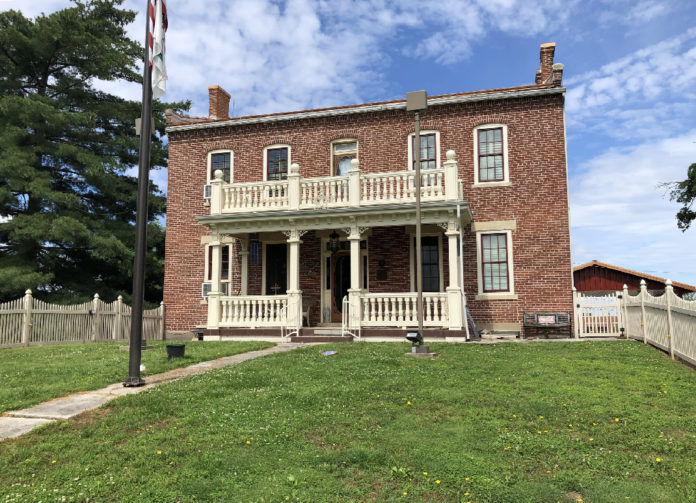 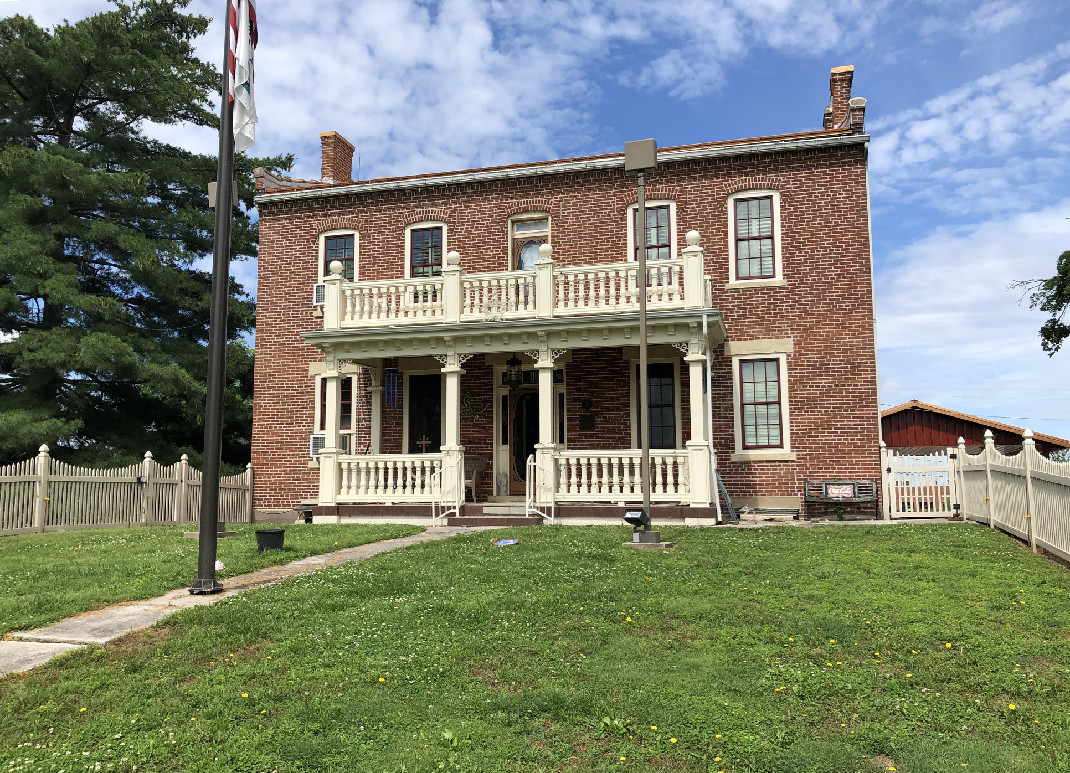 The Gerhard Herman Dulle home on St. Mary’s Boulevard earned a Local Historic Landmark Award from the Jefferson City Historic Preservation Commission in 1994. A tour of the stately structure begins in the front yard. A majestic oak tree, possibly only a few years younger than the house itself, shades the east-facing front yard. Dulle chose to build a house at this majestic setting nestled among the trees with a commanding view of a large farming valley below. The farmland has since been replaced with the lights of businesses, the busy expressway and a bustling Missouri Boulevard.
The two-story brick house with four chimneys was constructed as a pre-Civil War period home with some German influence. This sturdily built structure has been well preserved over the years and is maintained in an excellent condition. The front entrance leads into a hallway that separates the two sides of the house. A large open staircase ascends to the second story, which is also divided into the same four-room square spaces as below.
The exact year Gerhard Herman Dulle immigrated from the Province of Hanover, Germany, is not known, but he selected Missouri and the City of Jefferson as a place to establish his roots sometime after 1830. G.H., as he was sometimes called, was known for his pleasant personality and was respected by everyone who knew him. Settling first on a farm a mile southwest of the state Capitol, he engaged in dairy farming as well as brick manufacturing. His brickyard located west of the Capitol where Selinger Center is now provided the bricks to build the home on St. Mary’s Boulevard and many other structures within the Capital City.
The year 1846 was eventful for Dulle. On Jan. 27, he married Anna Maria (Haake) Schulte, widow of Johann Gerhard Schulte. The ceremony was officiated by the Rev. Ferdinand M. Helias. The Dulles had two sons, Henry J. and Bernard. The boys were raised on the Dulle farm with Anna Maria’s son, John William Schulte. All of the boys became successful businessmen.
It was also in 1846 that Dulle applied for U.S. citizenship and became a naturalized citizen in 1850, during the August court term.
Dulle, now a married man with a family to provide for, invested in a two-run stream mill built only a few years before on Jefferson Street. It was a horse-powered gristmill and the first of its kind in Jefferson City. In 1854, he erected the two-story Capital Star Mill at Main and Walnut streets, which was later replaced by a four-story mill in 1870. (Walnut was later renamed Missouri Boulevard.) The Victoria Mill was another branch of Dulle’s enterprise and located on the north side of Main Street and on the east bank of Wear’s Creek.
Dulle continued to acquire land around the city, and in 1858, he purchased the land upon which his stately pre-Civil War house still stands. The build date is estimated between 1858-62, at the beginning of the Civil War.
Maj. Gen. John Charles Fremont briefly used at least one room if not all of the Dulle home as his headquarters during the Union’s occupation of Jefferson City during the Civil War. The view from Camp Lillie, as it became known, was estimated at 1 mile. It is said the family buried all of the valuable housewares in a trunk during the occupation lest they be stolen, used or damaged. Later, the trunk was dug up, thus some family heirlooms were saved. Dulle descendants still have a family quilt from that trunk, and it is in good condition.
Dulle was a generous man and did not forget the church or those in need. He took it upon himself with other influential members of the community to organize the building of the present St. Peter Catholic Church. Dulle donated the bricks from his brickyard to build the church and rectory.
G.H. Dulle died in 1884, and the home was passed on to his wife, Anna Maria. Their son Henry continued to live at the home, while his brother, Bernard, acquired land west of the city.
Dulle’s son Henry married and raised 10 children in this home. After he and his wife, Theresia, died, ownership was passed on to Emma Dulle and Rose Moerschel. Emma was a daughter of Henry’s, and Rose was the daughter of Emma’s sister Rosemary Dulle Moerschel. Thus, Emma and her niece Rose were joint owners. Ownership of the home was later passed on to Rosemary Moerschel Vogel. Since her passing, descendants of G. H. Dulle have continuously owned and lived in the home.
The Dulle home, once on 214 acres, is now a grand house with a big yard, but the historic house still commands the hilltop on St. Mary’s Boulevard.
Anna Knaebel is a Jefferson City native and a freelance writer. She has co-authored “Military Memories” with Cindy Joannes. She is a former contributor to the Historic City of Jefferson’s Yesterday and Today newsletter.