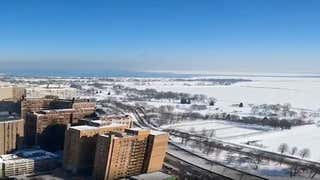 Satellite imagery has captured a number of interesting phenomena in recent weeks, ranging from retreating ice and snow to flooded rivers and the release of an ice jam.

The recent record-smashing arctic cold outbreak – the coldest in some areas since the end of the 19th century – dumped multiple rounds of snow and ice as far south as Texas and northern Mexico.

As the frigid air first infiltrated the Plains, some satellite imagery gave the impression the entire area was covered by one massive, stationary cloud.

But infrared satellite imagery, which measures infrared radiation emitted from clouds and ground was picking up on very cold ground, which was roughly the same temperature as the tops of clouds. This is something we typically see once or twice each winter in the coldest outbreaks.

One week later, as the coldest air of the outbreak poured through the Southern Plains, winter weather expert Tom Niziol noted some lake-effect snowbands in Texas.

This was a good example illustrating that lake-effect precipitation isn’t just a Great Lake phenomenon, but can occur anywhere cold air streams over enough warmer water to generate the instability needed for these thin bands.

Since it stretched into the Deep South, you knew it wouldn’t last long. It was fascinating to watch the retreat of this blanket of snow cover in visible satellite imagery.

Despite the overall retreat, there were still a few stubborn areas of snow cover in parts of Arkansas on Feb. 23, six days after the second of two winter storms pummeled parts of the state.

(MORE: The Most Snow Fatigued Cities)

Fortunately, flooding was minimized as the snow melted slowly and recent dry weather allowed the meltwater to soak in.

Another cool aspect to the snow cover’s retreat that caught the attention of meteorologists was the stark contrast in temperatures between areas with snowpack and those without.

On Feb. 23, high temperatures were generally 15 to 20 degrees colder in areas of lingering snowpack from Nebraska into the Ohio Valley, compared to locations just to the south of the snowy blanket.

The reason for this is the sun’s energy either is reflected off the snowpack, or goes into warming, then melting the snow.

It took until this cold outbreak for appreciable ice to form in the Great Lakes.

But, much of the ice that formed over southern Lake Michigan was gone in just days due to a combination of winds and warmer temperatures.

You can see this in the animation below, where a north-south stretch of ice off southeast Wisconsin’s shore was obliterated.

A more expansive area of ice locked in place along the Chicago and northwest Indiana lakeshore eventually broke free, leaving only a smaller east-west collection of ice slabs by Feb. 23.

The breakup of several huge sheets of ice away from the nearshore waters of Chicago was caught in a fascinating timelapse video.

Interestingly, a gap in ice over eastern Lake Erie allowed feet of lake-effect snow to pile up in western New York.

An ice jam is a traffic jam of pieces of river ice that pile up from an obstruction in the river’s flow, such as a narrow channel, a bend in the river, or a bridge, that quickly causes water and ice to back up behind the jam.

When this ice jam released, the National Weather Service office in St. Louis noticed you could spot the released ice flowing downstream past Jefferson City in satellite imagery.

If you look closely near the center of the animation below, you can pick out a light gray tendril extending east of Jefferson City. That’s the river ice flowing downstream, which shows up brighter in visible satellite imagery than the darker river water.

Here’s what the river ice looked like at ground level in Jefferson City, according to National Weather Service staff.

As if this wasn’t enough to wow meteorologists, something unrelated to snow or ice was also seen by a weather satellite on Feb. 23.

A special near-infrared satellite band known to meteorologists as the veggie band typically shows high contrast between water and land.

Stretches of the swollen Lumber, Pee Dee, Santee and Waccamaw Rivers resembled enlarged arteries in the satellite’s veggie band. Some locations were in major flood stage as of Feb. 23.

These were just a few of the latest examples illustrating how today’s sophisticated weather satellites detect much more than just clouds.

The Weather Company’s primary journalistic mission is to report on breaking weather news, the environment and the importance of science to our lives. This story does not necessarily represent the position of our parent company, IBM.

A league of their own