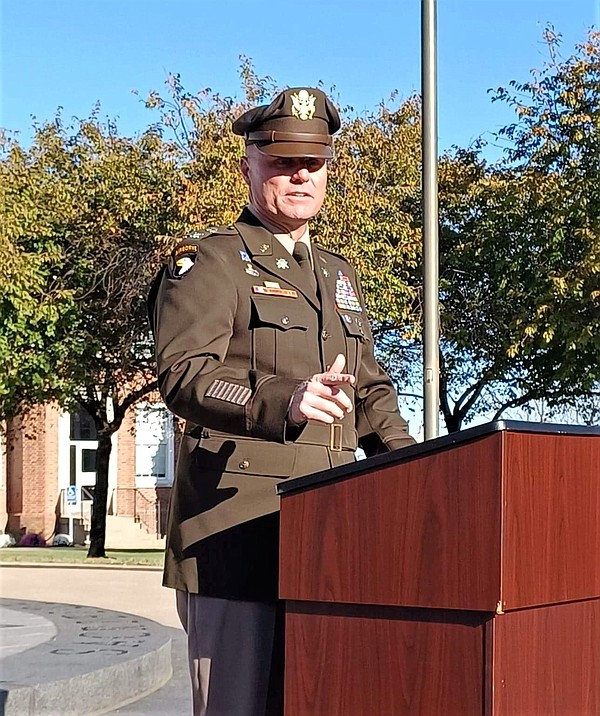 When arriving at Lincoln University in 1996 to participate in the Reserve Officer Training Corps (ROTC) program, Jay Harty already had 51/2 years of service as an enlisted soldier in the U.S. Army. The next four years would help him develop his leadership potential and forge his desire to lead troops compassionately and effectively.Harty graduated from Northern High School in Calvert County, Maryland, in 1990 and, several weeks later, enrolled at a local community college. Not yet fully committed to academic pursuits and without a job, a chance meeting with an Army recruiter soon inspired a major life change.”I was eating lunch at a local mall, and an Army recruiter walked up and asked, ‘What have you done for your country lately?'” Harty said. “During our conversation, I realized the Army would be a way to establish a career and learn a trade.”Enlisting in November 1990, he spent several weeks completing his initial training as an infantryman at Fort Benning, Georgia. While there, he was recruited by the 3rd U.S. Infantry Regiment — the “Old Guard” — after watching a recruiting video.”When I finished my initial training in February 1991, I went to the Old Guard and served for the next four years or so,” he said. “We marched in parades, conducted funerals and firing parties at Arlington National Cemetery, and also participated in ceremonies at the White House and Pentagon.”It was during this assignment that he met Krista Young of Tonganoxie, Kansas, who was working as a nanny in the Maryland area, and the two began dating. In 1994, Harty left the Army after his enlistment expired, but re-enlisted six months later after realizing how well his Army career was progressing.”They sent me to the 1st Corps Headquarters at Joint Base Lewis-McCord in Washington in 1995, and Krista and I married the same year,” Harty said. “While there, I ran into one of my former commanding officers who suggested I apply for the Army Green-to-Gold program, which would help me earn a college degree and commission as an Army officer.”He continued, “I was accepted and back in 1996, the Army required that you attend a HBCU (Historically Black College or University) if you sought a four-year degree. After some research, I chose Lincoln University since it had small classes and was only three hours from my wife’s family in Kansas.”Harty and his wife moved to Jefferson City, and he began classes in the fall of 1996. During college, he was actively involved in ROTC opportunities such as the Ranger Challenge Team and participated in competitions with the ROTC programs of other colleges.”I was part of the Ranger Challenge Team during all four years of college and captain the last three years,” he said. “It helped me to stay in shape and sharpened my skills as a soldier.”Harty added, “College was a tough time for Krista and I. … We were living paycheck to paycheck. I delivered pharmaceutical drugs for Whaley’s, and my wife worked at Capital Region Medical Center. But we relied on each other to get through, which was some of the best times of our marriage.”Graduating in May 2000, he was commissioned as a second lieutenant and sent to Fort Huachuca, Arizona, to complete military intelligence leadership training. He then moved to Germany, spending the next five years serving in roles such as platoon leader for a military intelligence battalion and gained experience within a division headquarters.The soldier and his wife soon welcomed their only child, a son named Noah.The young officer deployed to Kosovo in 2003 and, the following year, deployed to Iraq. After returning to the states, he was assigned to an Airborne Infantry Regiment at Fort Bragg, remaining there for the next 16 months and deploying to Iraq a second time. Upon return from deployment, he assumed command of a company and completed a third deployment to Iraq.”My next assignment was with the National Training Center in California from 2008-10,” he said. “I helped mentor future battalion intelligence officers who were deploying to Iraq and Afghanistan, and learned a lot about training doctrine.”In the coming years, he earned two master’s degrees while at Fort Leavenworth, Kansas, and finished a three-year assignment on the division staff of the 101st Airborne Division at Fort Campbell, Kentucky. During this period, he also deployed twice to Afghanistan.”For career progression, I needed a joint assignment and applied for an NSA (National Security Agency) position in Hawaii,” he said. “I was accepted in 2015 and, for three years, worked in multiple leadership assignments within the NSA and was engaged in national and strategic level intelligence gathering.”In July 2018, he became the centrally-selected battalion commander of the Processing, Exploitation and Dissemination (PED) Battalion, 1116th Military Intelligence Brigade, at Fort Gordon, Georgia.”That was a challenging and rewarding mission because my soldiers took raw intelligence data from every combatant command and created detailed reports used by many agencies and military units,” he said.Harty went on to graduate from the Naval War College in Rhode Island in the summer of 2021, earning his third master’s degree. He was then assigned as the deputy brigade commander of the 111th Military Intelligence Brigade at Fort Huachuca. He currently serves as the G3 for the United States Army Intelligence Center of Excellence.In May 2023, he will transfer to Fort Bragg, North Carolina, to assume command of the 525th Expeditionary Military Intelligence Brigade, continuing a progression of advanced leaderships roles within the U.S. Army.”I caught the leadership bug while in the ROTC program at Lincoln University, and it lit a fire that has burned in me for more than 20 years,” he said. “And my experiences at Lincoln also taught me a lot about peer leadership and using interpersonal skills to inspire others in order to accomplish the mission.”Harty added, “Leading people and making a positive impact in the lives of others is very important to me, and my goal has always been to be the type of leader that others want to be led by.”Jeremy P. Ämick writes on behalf of the Silver Star Families of America.