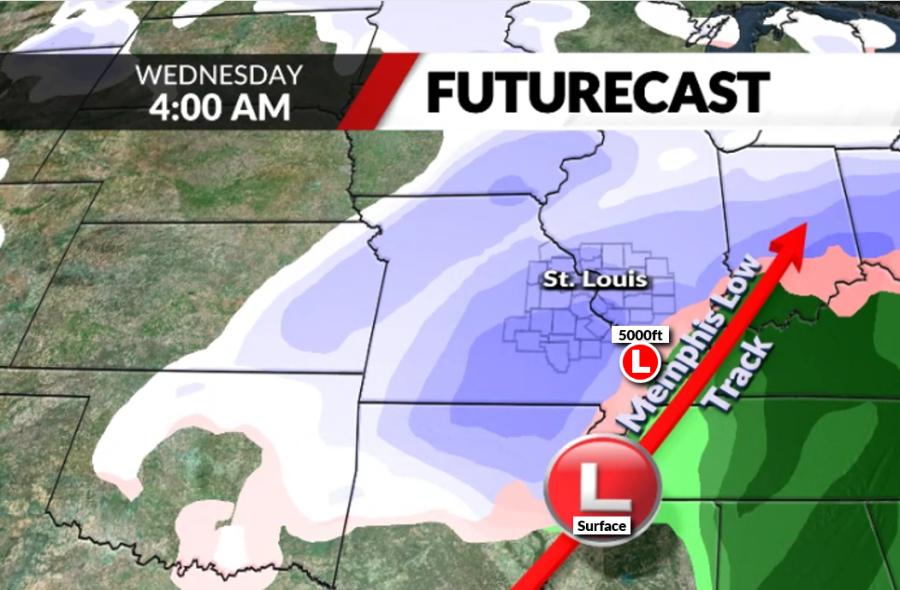 Simply put, most of our heavy snow events feature a surface low pressure center that passes over or very near Memphis, Tennessee. If you go back through the archives of old weather charts, you’ll see it over and over again. Almost all major winter storms have that surface low over Memphis.

Obviously, you have to have air that is cold enough to support snow as the precipitation type. But if that condition is satisfied, most mature low pressure systems that pass over Memphis during the winter will produce their heaviest snow very near St. Louis and the I-44/I-70 corridor.

So, let’s see how the forecast for our weather system, which is expected to arrive on Tuesday night into Wednesday morning, looks. The current forecast shows a nearly ideal Memphis Low track, taking the surface low pressure from southeast Arkansas up over the Memphis metro area, and then up to the southwest tip of Indiana. That is a classic Memphis Low track. The 5,000-foot reflection (850 mb low) of the surface low pressure is forecast to pass very near Cape Girardeau.

Trending: With car break-ins on the rise, downtown visitors opt to pay for a little peace of mind

There are other key features to track as well, but having those two key features hit the heavy snow benchmark means the St. Louis area should be right in the middle of the heavy snow as the storm pushes across the region Tuesday night into Wednesday morning.

How much snow? Well, that will still depend on the exact track of the system and also the air temperatures at the surface, as well as the temperature of ground itself. This system is moving into a marginally cold atmosphere for January, but it does have a lot of cold air aloft.

So, the storm will have to draw down that cold air in order to turn the cold rain into wet snow, which seems likely to occur Tuesday night around midnight based on the latest data, with the most intense snowfall rates expected between 2 a.m. and 8 a.m. early Wednesday morning. Early indications support widespread snowfall of 4 inches or more with this system.