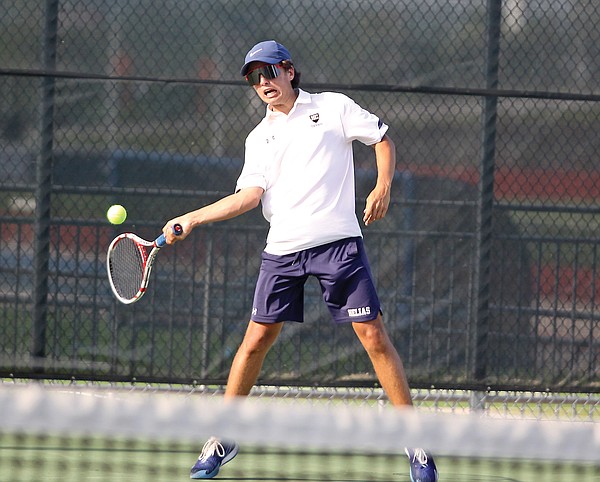 The Helias boys tennis team had one of its most successful seasons in team play, winning a school-record 17 duals this spring.Now it’s time for the Crusaders to turn their attention to individual play.Ethan Foucheaux, Andrew Dowden and Caleb Mueller are three of the 48 qualifiers in the Class 2 singles and doubles state tournament, which starts at 9 a.m. today at the Cooper Tennis Complex in Springfield.“The goal is always to try to win two out of three on the first day to get to the medal rounds,” Helias coach Margaret Shimkus said. “We’ll just play one game, one match, one point at a time.“It’s good to have half the team going.”Foucheaux, who will be competing in the singles state bracket, will play Mehlville’s Edin Muminovic in the first round.“He is a district runner-up, but he also has a pretty good record,” Shimkus said of Muminovic, who lost 0-6, 0-6 to Rockwood Summit’s Arnav Purshottam in the District 1 championship match. “… Like I tell the kids, never underestimate the power of your opponent.”Foucheaux won the District 5 singles championship May 7 at Capital City High School. He only dropped one game all day, sweeping Rolla’s Elson Wang, Jefferson City’s Arjun Garikapaty and Rolla’s Evan Huang to claim his district title.It’s easy to feel good about having a performance like that, but Foucheaux is quick to keep things in perspective.“If you go and look at everyone else who played, the other No. 1s also had great district tournaments,” he said. “I just have to look at some of the competition and know that state is at a different level.”Foucheaux had a 26-1 record in singles play this season, recording the most singles wins in a season for the Crusaders. Almost all of those wins came against another school’s No. 1 singles player.“He played singles in all the tournaments we did,” Shimkus said. “He wanted to do that. He did play well in doubles, too, but he opted for singles.”Foucheaux began his season with 26 consecutive wins before losing Monday in the Class 2 team quarterfinals at Barstow.“The guy I played was a great competitor,” he said. “Luckily, he’s playing doubles at state and I’m playing singles.”Win or lose, Foucheaux will play either Fort Zumwalt East’s Jaq Foster or Justin Jan of MICDS in his second match today.“I feel confident,” Foucheaux said. “I’ve had a great year and I’m hoping to bring it on in the state tournament.”For Dowden and Mueller, they will play in the doubles state bracket, opening against Barstow’s Richard King and Robert King in the first round. The Kings won the District 7 doubles title 6-0, 6-1 against Ian Ding and Tyler Brouhard of Thomas Jefferson Independent.“It’s definitely going to be a big challenge, but I’m excited,” Mueller said. “I think we have a real chance if we can keep our heads in the game.”In their second match at state, Dowden and Mueller will face either Ladue’s Max Chen and Nathan Chen or Fort Zumwalt East’s Tave Markowski and Thomas Bambrick.In dual competition, Dowden and Mueller were not doubles partners, as Dowden matched with Foucheaux and Mueller played alongside Jonah Lanigan.“I think, out of all the team members, those two are the most congenial and can work with anyone,” Shimkus said. “They just make it happen, and they both wanted to play doubles. They bought into it, and when that happens, they gel, and I think that’s why they were successful.”Dowden and Mueller finished runner-up out of 14 doubles pairings in the District 5 Tournament. They defeated Capital City’s Trevor Vogt and Xander Schmid 6-1, 6-4, then won 6-4, 6-2 against Jefferson City’s Owen Ramelb and Aarush Deshpande in the semifinals to clinch a state berth.Rolla’s Luke Foster and Cameron Cooper defeated the Helias duo 6-1, 6-4 in the championship match.“They played pretty well, but they got tired at the end,” Shimkus said.Dowden said in doubles, Mueller’s strength is playing at the net, while his strength is hitting the cross-court shots from the back.“If we see something with our opponent that stands out to us, we’ll work on that during the match,” Dowden said.Foucheaux, a junior, and Mueller, a senior, are both making their state tournament debuts. Dowden is returning for a second straight season after playing in the state doubles tournament last year with Justin Francka.“It’ll be a little less nerve-racking to have that under my belt,” Dowden, a junior, said. “… People come to play and you have to be prepared, you can’t be slacking. Everyone there is really good.”The top-eight finishers in each bracket earn all-state honors. To get to all-state status, the Helias trio will have to win two matches today to advance to Friday morning’s action.“It’s my job to make them think about the moment,” Shimkus said. “They have to be in the moment, play that point, play that game, play that set.“If they can do that, they’re going to play winning tennis.”