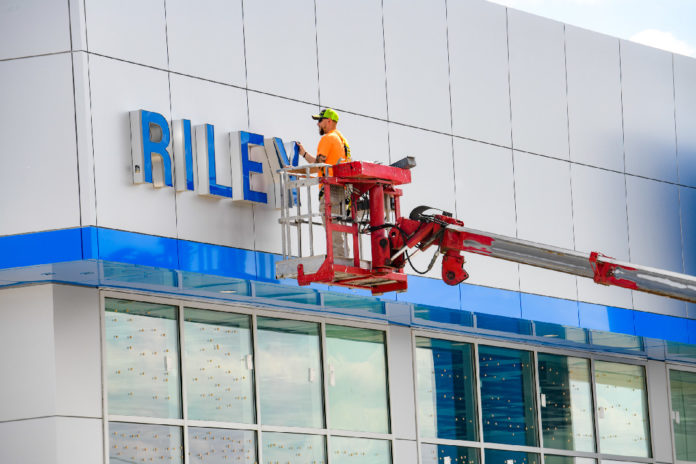 Just last month, Riley Auto Group celebrated its 85th anniversary in Jefferson City. The party came on the heels of reopening its Chevrolet, Buick, GMC and Cadillac operation on Christy Drive in May after it had been ravaged by a tornado in 2019.
On Friday, the Riley family announced it would be selling the Chevrolet dealership, along with its Toyota dealership and collision center, to the Drewing Automotive Group.
The deal is expected to close in December. The new dealerships will operate under the names Rusty Drewing Toyota and Rusty Drewing Chevrolet Buick GMC Cadillac as part of the Drewing Automotive Group.
All employees will be retained in their current positions as part of the purchase, including Riley family members Gemma Riley, Kyle Riley, Amanda Riley and Jay Schnieders.
“I have the utmost respect for what the Riley organization has done; they have embodied the spirit of how a dealership should be run and operated,” said Rusty Drewing in a news release. “What Kevin, Mike and Carey Riley have done has been nothing short of exceptional.
“I love the dealerships, the way they run them, the hometown feel, and we will continue to support everything locally. We will be a big part of the community and plan to carry on the traditions they have established over the last 85 years.”
Both the Rileys and Drewings have long histories of being involved in the auto sales business.
Donald F. Riley bought the Jefferson City Chevrolet dealership in 1936. With his unexpected death in 1967, Donald F. Riley left the dealership to his son, Donald B. Riley. After nearly 20 years of ownership, Donald B. Riley transitioned the managerial responsibilities to his children, Mike, Kathy, Kevin and Carey Riley, each of which contributed to running the dealership
In 1983, Gary Drewing started with Joe Machens Ford in Columbia, and the dealership became the largest volume dealership in the state of Missouri, as well as one of the largest Ford dealerships in the United States. Joe Machens Dealerships became one of the largest dealership groups in the country operating in Columbia and Jefferson City.
Drewing Automotive Group was established toward the end of 2015, after selling eight of 10 Joe Machens Dealerships to McLarty Automotive Group.