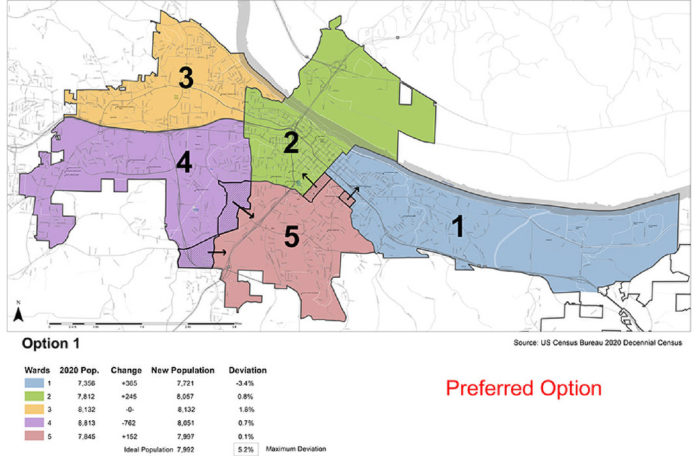 For some voters, the spring municipal election will look different than it has in previous years.
It will mean a different ward, different voting location and different representatives.
However, the decision wasn’t made about who will be impacted.
That is Jefferson City Planning Manager Eric Barron’s pitch for why the community should be engaged in the city’s efforts to redraw the ward map.
The city hosted the first of two open houses Thursday night where members of the public could learn more about the process and the four maps up for consideration as well as ask questions and provide input.
“We had some very informed and interested citizens come in and ask some very good questions,” Barron said. “That’s kind of the underlying theme that we’ve always proceeded with at the staff level on this project is trying to accomplish this with as little change as possible.”
The next open house will be 3-6 p.m. Tuesday in the council chambers at city hall.
The decision to redraw ward lines was a result of the 2020 census, which reported a higher discrepancy in population between the five wards than the 10 percent allowed.
Ward 4 is the largest ward by population at it stands and grew over the last decade by 949 people, or 12 percent. Ward 3 also grew by 281 people, or 3.6 percent.
Ward 1 saw the largest loss at 5.5 percent, or 621 people; ward 2 dropped by 3.2 percent, or 262; and ward 5 dropped by 2.3 percent or 184 people.
The goal of redrawing wards is to get all five wards within 5 percent above or below 7,992 people to get the wards close to even again.
However, that means the residents of the areas that move would be part of a new ward, with new representatives and a new polling location before filing for the April 5 municipal election opens Dec. 7.
The city’s goal is to have a public hearing on the options at the Oct. 18 meeting in the council chambers, and the council could vote on a new ward map at the Nov. 1 meeting.
Members of the public can view the maps and explanation of them on the city’s website, jeffersoncitymo.gov.
Barron said for comments to be presented to the council, they need to be written down — although staff can provide assistance with that for those who need it.
Residents can email [email protected], call 573-634-6410, or mail the Department of Planning and Protective Services at 320 E. McCarty St.
“This is the foundation of democracy at the local level,” Barron said. “The city and its existence really starts with the elected representatives — the mayor and the different ward representatives. This is important stuff. This is representing the citizens at the council level.”
^
The map options
City staff prepared four map options for review based on different criteria.
The first map, which is preferred by City Council, includes a moderate population shift and prioritizes correcting current neighborhood splits.
Currently the border between Wards 4 and 5 runs along Cedar Hill Road to Overlook Drive, which turns into Sun Meadow Lane until it reaches Southridge Drive.
Under the first map, it would start at the intersection of Stadium and Southwest boulevards to Satinwood Drive and follow along Vieth Drive.
Sun Meadow Lane is one of the local streets currently used as a ward boundary, Barron said. The issue with using local streets is it splits neighborhoods with residents on each side of the street in different wards.
The other southern section of Ward 4 up for debate is right on the edge of the city limits, which is two sides of the piece with a third the existing border with Ward 5.
The northern border would be drawn along Route C and go until the city limit.
Under the proposal, both areas would move into Ward 5.
It would also extend the Ward 2 boundary from Jackson Street to Lafayette Street, which would take area out of Ward 5, along with an area from Locust Street to Bald Hill Road with an edge along East Atchison Street would be moved into Ward 1.
The second map is similar to the first with a focus on minimizing population shift and boundary changes.
It would move the southern section of Ward 4 into Ward 5. It would still move the part of Ward 5 around Locust Street and Bald Hill Road into Ward 1.
However, the map would also move a northern section of Ward 4 into Ward 2. The area would take an area south of U.S. 50, from Dix Road to Missouri 179.
The third map would have all of the sections move and is focused on making room for Ward 4 to grow.
Barron said the city knows of several subdivisions going into Ward 4 and expect to see it grow more over the next decade.
This map, which would move more than 1,000 people out of Ward 4, would make room for continued growth in the area while keeping the city within the acceptable population range for the ward.
The fourth map is mostly the same as the third, but is less focused on equalizing the population within the other wards.
Under this proposal, Ward 4 would have the same sections taken out of it, with the northern piece going into Ward 2 and the southern pieces going into Ward 5.
However, rather than two parts of Ward 5 being taken out, it would only take out one.
It would have the area around Lincoln University, which has a high population density, move from Ward 5 and into Ward 1.