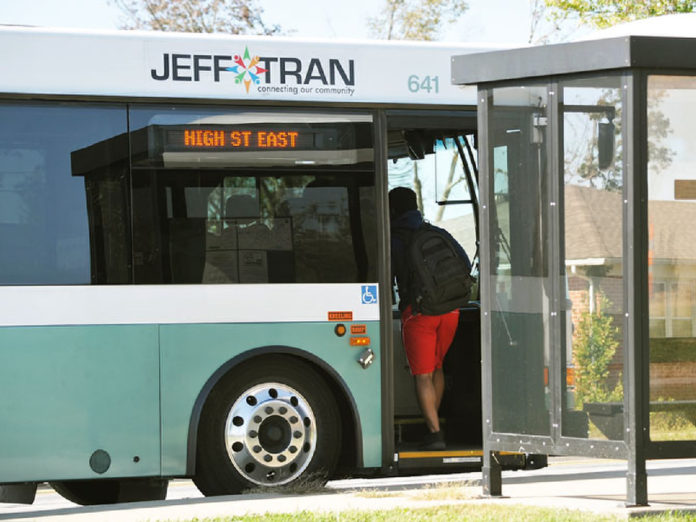 Students won’t have school and state employees won’t have work Monday, but the Jefferson City bus system will still be running — with one difference.
Those riding a JeffTran bus on Columbus Day won’t turn over $1 for the fare as part of a customer appreciation day program.
Transit Division Director Mark Mehmert said the special serves two purposes: appreciating regular riders and promoting the bus.
This is the sixth year JeffTran offered free fares on fixed routes for Columbus Day; Mehmert said ridership usually doubles on the day.
The transit service had about 750 riders a day in 2019.
“A lot of people use it as an opportunity to take grandkids out or get out,” he said. “They made a day of it. They’re state workers who might have an opportunity to go see some of the sites or something like that.”
Mehmert said he’s heard stories about people using the free rides to entertain their kids or just see the city in a different light.
“I know one person, for example, they make a trip out of going to the Capitol,” he said. “Others go to Central Dairy and stuff like that. They just use the bus to get around on because it’s free, something different for the kids to do on a day that they’re off.”
Some of the parochial school students, Mehmert said, don’t regularly ride the bus and something like this can be a free chance to experience what it’s like.
“Riding the bus is kind of a special treat for them,” he said. “Maybe not so much for the public school kids, but for some of the parochial school kids, it’s a pretty interesting trip for them.”
Mehmert said drivers can help those unfamiliar with the bus system identify where they need to get off or when to transfer between routes to get where they want to go.
“The bus drivers know the system very well, and they are more than willing to help somebody,” he said.
The day isn’t about bringing in new riders though, that’s a byproduct.
Rather, it’s a day the staff can recognize the people who rely on JeffTran to get to and from work or running errands.
“It’s really to say thank you to folks,” Mehmert said. “It says thank you to our riders, give them a day where it’s at no cost to them and they don’t have to worry about pulling up a fare.”
The system saw 201,733 riders in 2019 and 139,747 in 2020.
It typically costs $1 to ride the bus, with free transfers, or 50 cents for those who qualify for reduced price fares.
Buses run six fixed routes along Business 50 East, Capital Mall, High Street East and West, Missouri Boulevard and Southwest Boulevard. A map with all the routes can be found jeffersoncitymo.gov.
Ruses run from 6:40 a.m.-6 p.m.