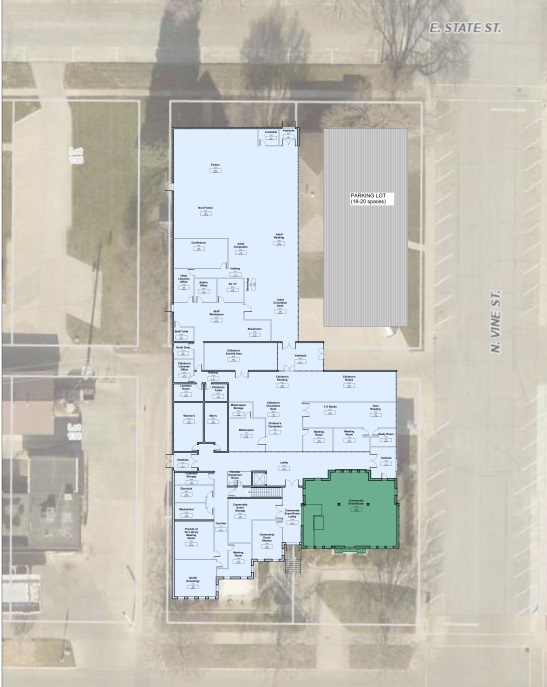 The Jefferson city council at its Nov. 22 meeting took the first step in a possible expansion project for the Jefferson public library.

Pete Franks of Franks Design Group and Susan Laehn, president of the library board of trustees, presented the findings of a feasibility study of the project to the council. Franks’ presentation was a shortened version of what he presented in October to the trustees, the feasibility study committee, Friends of the Library, and other interested members of the community.

Franks and the study committee explored four options: razing the 1966 library addition and putting a two-story structure with a basement in that space (Option A, estimated cost $10.4 million); acquiring ground and building an entirely new “from scratch” library (Option B, estimated cost $8.8 million not including land acquisition); acquiring an existing building and repurposing it as a library (Option C, estimated cost $9.7 million, using former Wells Fargo Bank, not including purchase of the property); or razing the 1966 addition and building a one-story structure to the west and north of the Carnegie building (Option D, estimated cost $9.7 million, not including purchase of two properties that comprise the northeast quarter of the block on which the library is situated).

The goal was to plan for a library that would serve the library needs of Jefferson residents for the next 75 years.

She asked the council to accept the recommendation of the library trustees, “to prioritize the library expansion project as you move forward, and to begin exploring the option presented tonight, Option D… That would include allowing the trustees to form a new committee to direct and oversee that exploration alongside the city council and the city administrator.”

Council member Darren Jackson said he was glad the Wells Fargo building was considered as an option, as at the “first blush,” that was the option he and many residents thought would be the best. (The building is too small, too expensive to purchase, and would need a lot of structural work to accommodate the needs of a library, Franks determined.)

“I love the concept of maintaining the Carnegie library. I think as far as a location, I don’t know there’s a better location than the one we’ve got right now,” council member Harry Ahrenholtz said.

City staff was asked to explore the possibility of purchasing the needed properties and closing the east half of the east-west alley between Vine and Elm Sts. The request was not worded as a direction, but as “an informal nudge,” per council member Matt Wetrich.

Laehn said the trustees would like to do as much of the fundraising for the project through grants and private donations, and suggested hiring a grant writer. “We really, really hope we don’t have to put this to the public and ask for a bond unless it’s just a formality in terms of how we spend the money.”

Christmas in Jefferson County in 1886 |