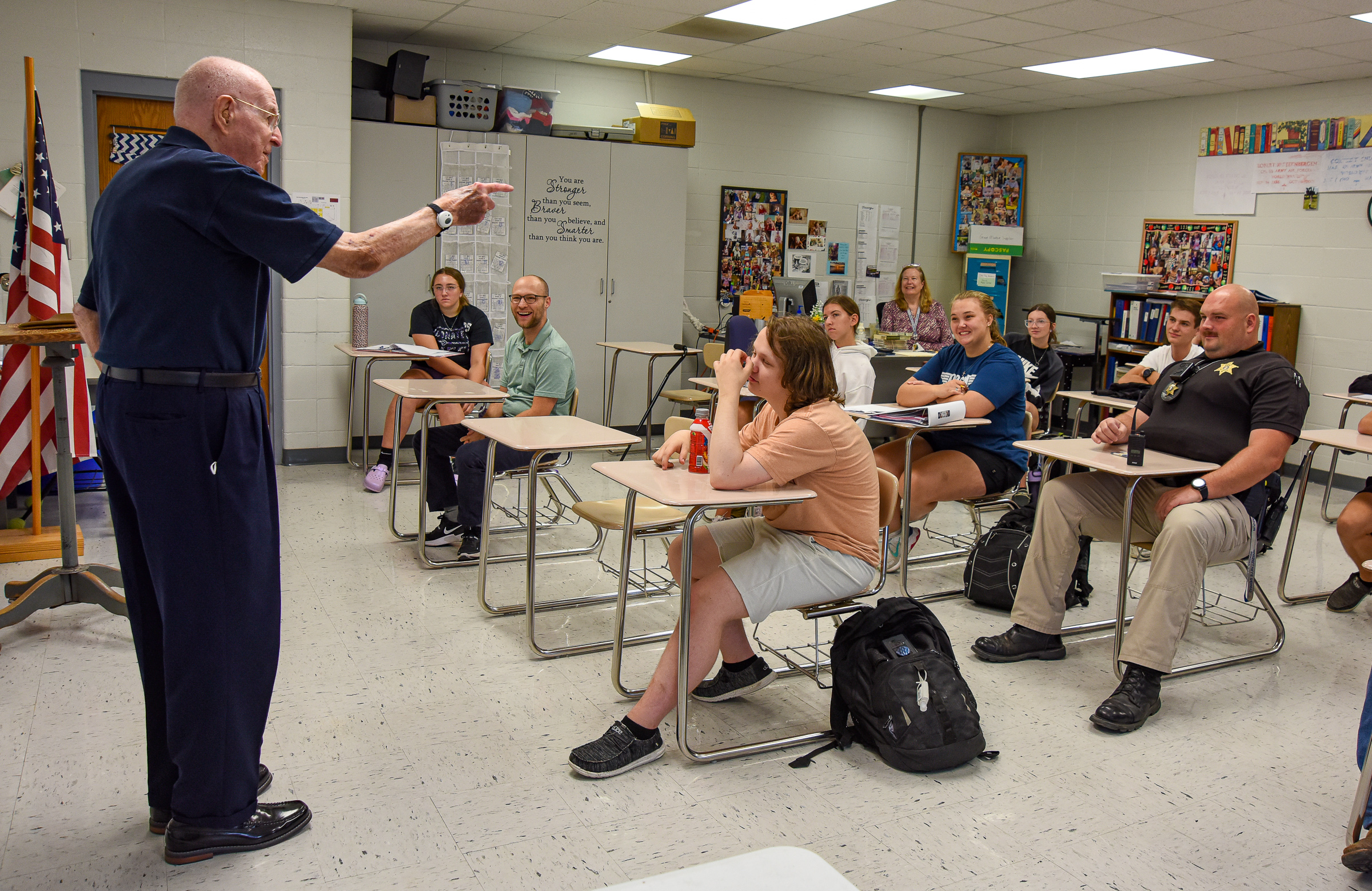 James Schaffner, who was recently inducted into the Missouri National Guard Hall of Fame for his decades of service, came to the school to share his experiences as a soldier during World War II.

The students and their teacher, Denise Crider, placed small American flags up and down the long drive to the school and parked trucks displaying flags near the road where Schaffner entered.

“I never make notes to make a speech — I always say that I’d kind of like to hear what I’m going to say myself,” he joked.

He grew up in Jefferson City and moved to St. Louis in high school. At age 18, at the end of his senior year, Schaffner received notice he would be drafted.

“Best thing that ever happened to me,” he said. “And I look at you young men, and I hope a lot of you will join the service. It’s one of the greatest things you do and a great thing to know that you served your country.”

He attended training in Arkansas, then learned he would be deployed to the Pacific. On the trip out, Schaffner said he was so seasick he couldn’t wait to get off the boat.

Schaffner pitched a pup tent along with the other soldiers in some pineapple fields owned by Dole.

“You are not to touch a one of those, ever, you got it?” his sergeant told them.

“I tell you what, though, those are the best tasting pineapples ever,” Schaffner told the class.

Schaffner’s unit spent the rainy season in the Pacific. Neither side could do much while the rain poured. He shared a tent with another man, then dug a foxhole to share. The foxholes would quickly fill with water when the rain came, and Schaffner went days without a dry set of clothes to change into.

His unit was shelled at Okinawa by the Japanese army. One shell hit the tent and blew it away, but Schaffner survived with some shrapnel in his arm.

“How much better can you be protected by God than that?” he said. He received a Purple Heart and recovered.

Schaffner told the students it was difficult emotionally to fight with those he thought probably didn’t want to be there any more than he did.

He was shot in the leg during the fighting and was sent to the hospital and awarded a second Purple Heart. While recovering, he was thankful for the dry cot that stood off the ground and kept him from the endless rain he had endured.

An Army man, he returned from the Marine hospital in which he had been staying in a Marine uniform because his clothes had been lost. He received a fair bit of grief from his fellow Army soldiers.

When Schaffner returned, Okinawa had been secured.

They later learned the war with Japan was over, and they were ready to go home. But Schaffner and his fellow soldiers were actually sent to Korea to evacuate the Japanese who had occupied it. A little more than a year and a half later, Schaffner was sent home.

He later served in the reserves and the National Guard, and eventually worked his way up to the rank of lieutenant colonel.

While Schaffner’s proud of his service, he doesn’t want to be called a hero.

“I am not and was not a hero,” he said. “I’m just one of those guys … (who) got drafted, went into the Army, served my country proudly, came home, and here I stand at 96 years of age, doing well, I think, and proud of the fact that I was able to defend my country so that you could be here today.”

Schaffner passed around photos Wednesday he took during his time in Korea. Many students thanked him for his service as they stood for a picture with him.

Students in the year-long class haven’t yet covered some of the events Schaffner referenced, but they have been learning about the leadup to World War II. They’ve also participated in various activities like writing a letter to a veteran and taking pencil or crayon rubbings from military gravestones.

When it was time for Schaffner to go, the class tried to give him a good sendoff. They walked him out to his car and watched him drive away past the flags they had planted.

Julie Smith/News Tribune photo: World War II veteran James Schaffner visited Denise Crider’s class at Russellville High School Wednesday morning, Sept. 21, 2022, where he talked to students about what life in the U.S. Army was like.  Schaffner retired from the Army National Guard after 30 years of active, reserve and guard service. 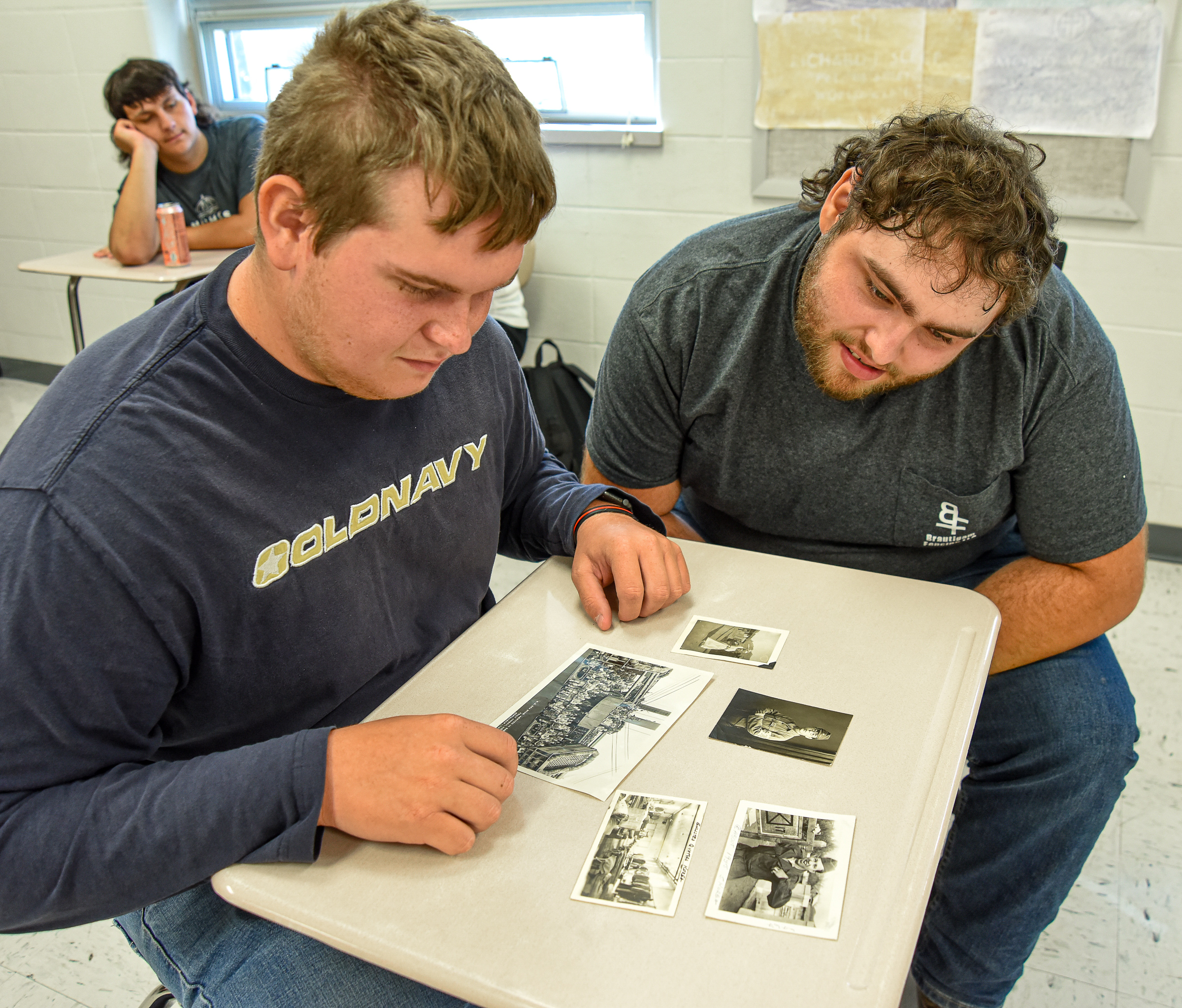 Julie Smith/News Tribune photo: Payton Taube, left, and Jorden Schubert, look at some photographs that World War II veteran James Schaffner had from his time in Japan and Korea with the U.S. Army. Both students are seniors in Denise Crider’s World War II class at Russellville High School where Schaffner visited Wednesday morning, Sept. 21, 2022, to talk about his military experience. 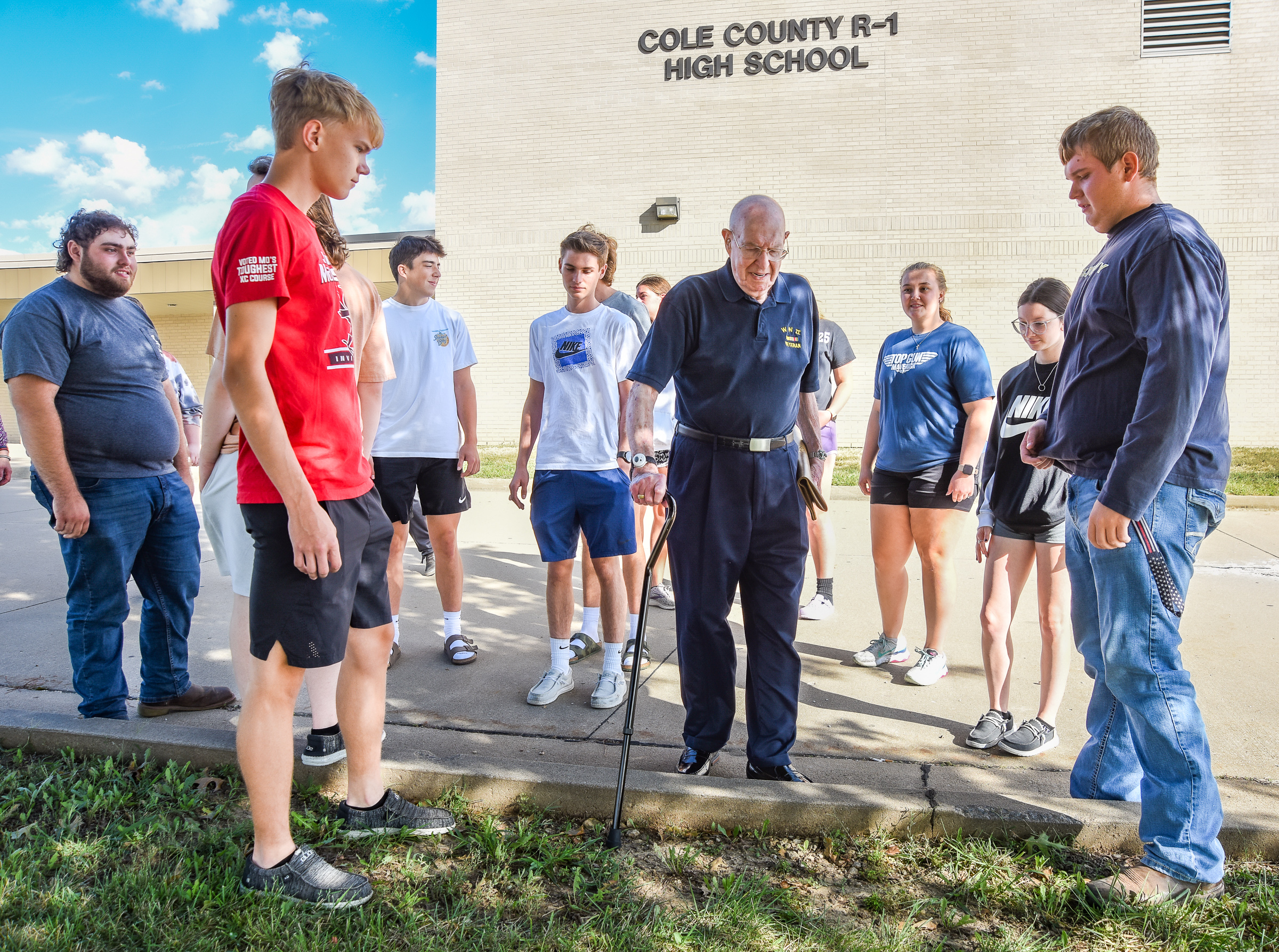 Julie Smith/News Tribune photo: Following James Schaffner’s visit to Denise Crider’s World War II Class at Russellville High School, students joined him as he walked to his vehicle. Schaffner was delighted to see that the school’s entrance had been lined with small, American flags for his visit.

Blues in the Park attracts largest crowd yet