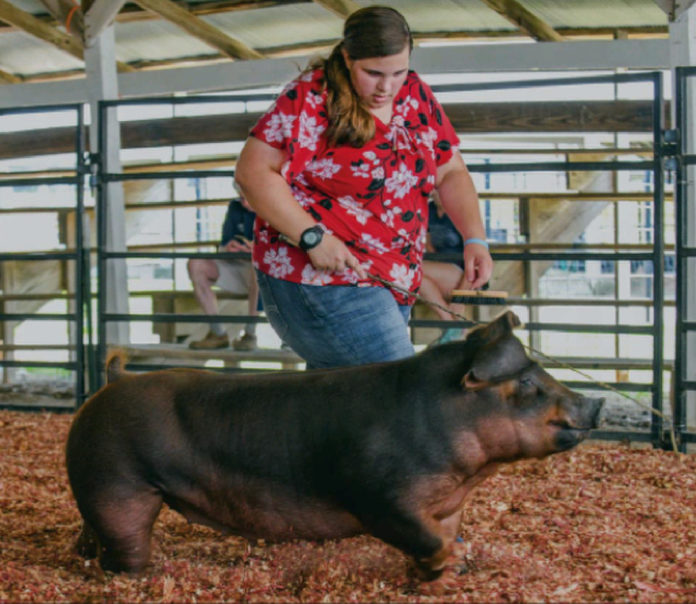 Beating the heat and other competitors, Erica Schweer and her Yorkshire pig Norma took home the title of grand champions at Monday’s swine breeding show.
Livestock shows continued Monday at the Jefferson City Jaycees Cole County Fair with a breeding swine show at 1 p.m. and a breeding beef show at 6 p.m.
The livestock shows kicked off Sunday with a sheep and goat show. Today, market beef and swine will take the center stage. The livestock auction is Wednesday, and the ham and bacon auction is Friday.
Schweer was the breeding swine show grand champion with a Yorkshire breed that went unopposed in its class. Dakota Rush was the runner-up with his Hampshire breed that also won its class.
“It just kind of had my adrenaline going,” Schweer said about competing.
Other winners included Savannah Thomas with a blue butt pig in the crossbreed class, and Abigail Miller in the Duroc class. Miller also won the senior showmanship competition, while Ethan Miller and Gage Bolinger each went unopposed and won the intermediate and junior showmanship competitions, respectively.
Show Judge Clint Perry said he was impressed with the quality of livestock presented at the breeding swine show.
“It’s been a good show. The quality of the animals is really good, and the kids have done an excellent job getting them shown and prepared today,” Perry said. “With smaller county fairs, you never know for sure if you’re going to see really high-quality livestock or not. And today, we saw it. There wasn’t much in numbers, but the quality was certainly there today.”
Breeding swine are the pigs 4-H and FFA exhibitors use to reproduce new litters.
Rachel Longan, an agriculture teacher at Nichols Career Center, said the swine are judged on a variety of characteristics, such as structural soundness, muscling, definition and their ability to be good breeders.
“Structure is probably one of the most important things whenever you’re dealing with breeding pigs because you need them structurally sound,” Longan said. “You want to make sure that they’re going to pass good genetic traits on to their offspring so that your new litter of pigs or your new calves are going to be ready for market because that’s how the exhibitors are going to make their money from their projects.”
Longan said county fairs, particularly in Mid-Missouri, are major events for these 4-H and FFA students, who spend the year raising their swine, beef and other livestock in preparation for the opportunity to showcase.
Monday had 15 breeding swine and 53 breeding beef animals competing for ribbons.
Swine Superintendent Amanda Holtgrewe said the pigs and beef were divided into classes based on breed, instead of weight like in market shows.
Longan said beef are usually more popular in breeding shows, but market swine and beef are typically more even in participation.
This year, 64 market swine and 69 market beef are registered for today’s show.
Monday’s breeding swine show had one to four pigs per class.
“It depends on who wants to bring animals out or not,” Holtgrewe said. “So typically Cole County is not a big swine-producing county in Missouri, versus our friends over in Osage County. So we usually don’t see a lot of numbers.”
Holtgrewe said participation in breeding swine events has been trending upward over the last decade, but numbers may be down this year with a few regularly competing families skipping this year for various reasons.
Thomas, the crossbreed class winner, said she was looking to capitalize on the small class sizes and win ribbons with her two pigs, Annie and Lucy.
Thomas said she likes raising the pigs because it gives her an opportunity to get out and spend time with friends in the barn.
After getting the swine in January, Thomas said she spent the first two months sitting with them on the floor and feeding them marshmallows to build a relationship.
“The months after we would start slowly walking like five minutes or so. We would slowly introduce a small space and then work up to larger spaces,” Thomas said. “As time went on, they’re our best friends. They sit there like dogs and follow us.”
Thomas said the shavings around the arena where the pigs are showcased were too deep this year, which made it more difficult for the swine to cooperate.
Schweer, the show’s overall winner, said it was exciting to be named the grand champion with her pig Norma.
Ellysa Schweer, Erica’s sister, said spending quality time with the swine was important for getting her show-ready, but she said she doesn’t get too attached.
“It’s just like, you’re attached to them, but if you have to see them go, you can see them go,” Schweer said. “It’s not the end of the world.”
Bolinger, a 9-year-old 4-H exhibitor who won the junior showmanship award, was competing with three swine, including a former champion.
He said he was hopeful his corn and soybean fed pigs would take home some ribbons. He took home at least three, including runner-up in the Hampshire class.
The fair’s annual bucket calf show was also scheduled for Monday but canceled because of a lack of participants.
Maggie Thessen, a third-grade Wardsville 4-H member and regular participant in the bucket calf shows, said she was disappointed to hear the show was canceled.
Thessen said she had a calf prepared to showcase, spending the past several months feeding, washing and caring for the animal.
She said she also had a steer to present at a beef show, so she was still looking forward to a chance at winning a ribbon.
She said is unsure if she will compete if the show is brought back next year.
Monday evening fair activities included $1 ride night, the Mid-America Tractor Pullers Association tractor pull and a performance by Disco Dick and the Mirrorballs.