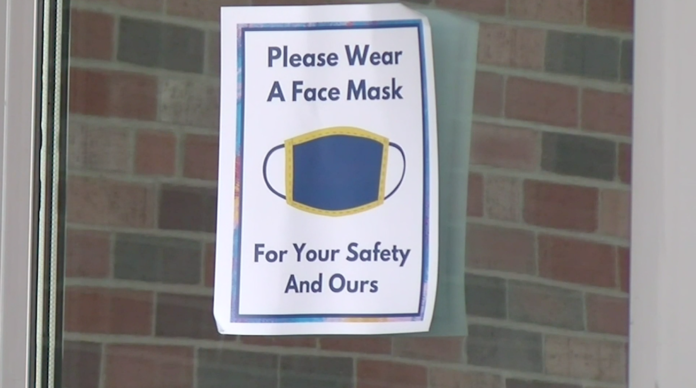 Counties where mask mandates were implemented experienced a lower number of COVID-19 cases and deaths, according to a data analysis conducted by the Department of Health and Senior Services and obtained through an open records request by the Missouri Independent and the Documenting COVID-19 project.

By comparing the seven-day averages of cases in Missouri counties with and without mask mandates in place, DHSS found that both case and death numbers were lower during the peak of the delta variant in counties that enforced mask-wearing. The analysis was conducted at the request of Gov. Mike Parson’s office on Nov. 1, but not shared publicly, the Independent reported.

The study was obtained through the Missouri Independent’s work with Documenting COVID-19 project at The Brown Institute for Media Innovation.

In emails obtained by the Missouri Independent, Donald Kauerauf, DHSS director, said “with great confidence” that the data proved there was lower transmission in counties with mask mandates.

Death rate graph created by the Department of Health and Senior Services, from Documenting COVID-19 project at The Brown Institute for Media Innovation. The blue line represents masked counties, with the other line represent counties with no mask mandates.Four Missouri counties have mask mandates in place — St. Louis, St. Louis County, Kansas City and Jackson County — and the Missouri attorney general’s office has active or pending lawsuits against each of them. The attorney general has also sued Columbia Public Schools over its mask mandate.

Chris Nuelle, Attorney General Eric Schmitt’s press secretary, said the attorney general’s office finds the conclusion of the study inaccurate because case rates were higher in masked counties before the time period shown in the graphs.

“We’ve been clear that Missourians should have the right to make their own decisions, and that government bureaucrats shouldn’t be mandating masks or vaccines,” Nuelle said. “We will continue to fiercely litigate our lawsuits against mask mandates in Missouri.”

A hearing in the St. Louis County lawsuit was rescheduled from Tuesday to next Thursday, Dec. 9, to provide time for attorneys to consider the impact of a recent Cole County ruling barring local health officials from issuing health mandates.

Check back for updates to this developing story and watch ABC 17 News at 6.