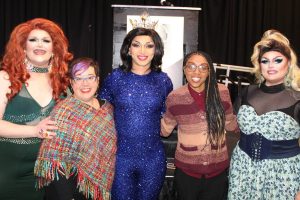 Mayor Barbara Buffaloe and second ward councilwoman Andrea Waner defend the event, with the mayor saying they want to reaffirm that Columbia is a community that supports all.

Missouri Attorney General Andrew Bailey sees it differently, saying transporting students to a drag show likely violates state law. He’s referring to a law approved by Missouri lawmakers in 2022 that criminalized providing certain sexual material to a student. The law took effect in August. Attorney General Bailey is slamming Mayor Buffaloe and CPS Superintendent Dr. Brian Yearwood, saying they deliberately subjected a group of middle-schoolers to an adult-themed drag show performance and failed to report the incident. Bailey writes “This kind of performance has no place in the public educational system.”

Mayor Buffaloe disagrees, tweeting that “drag is a cross-cultural art form with a long and rich history that is fun and encourages self-expression.” The mayor says that as hate crimes against drag show locations and performers are being committed elsewhere, she and others wanted to reaffirm that Columbia is a community that supports all.

Attorney General Bailey will be live on 939 the Eagle’s “Wake Up Mid-Missouri” at 7:35 on Monday morning, to discuss the incident and the new law he’s referring to.

Columbia second ward Councilwoman Andrea Waner is blasting the governor’s comments, tweeting that “to characterize a three-song, 8:30 am drag set as ‘adult performers’ is incredibly dangerous. You know what you’re doing here and that, my guy, is what’s unacceptable.” Governor Parson says CPS parents weren’t clearly informed of the program’s contents, and the governor says adult performances are not diversity. He is calling on CPS to prioritize math, reading, writing, science and history.

Mayor Buffaloe says Columbia is a community that supports all, tweeting that “We felt that it was important and appropriate to showcase members of our LGBTQIA+ community during a celebration about our diversity.” Thursday’s celebration was organized by Columbia’s Office of Cultural Affairs. There were a number of complaints about the event from parents and Columbia-area residents, during Friday afternoon’s “Randy Tobler show” on 939 the Eagle. The CPS district boundaries extend outside of Columbia.

Missouri Senate President Pro Tem Caleb Rowden (R-Columbia) says CPS has responded to his request for a meeting with Superintendent Yearwood and school board members to discuss what happened on Thursday. Senator Rowden tells 939 the Eagle that they’re working on a time for this week. He says his office has been inundated with phone calls and emails about the drag queen performance, including from upset parents whose children attended. Rowden says he wants to hear from Superintendent Yearwood and the board on the process that led to the event.

State Sen. Nick Schroer (R-O’Fallon) is calling on CPS to testify before the Missouri Senate Education and Workforce Development Committee, saying parents are outraged. Senator Schroer serves on the committee.