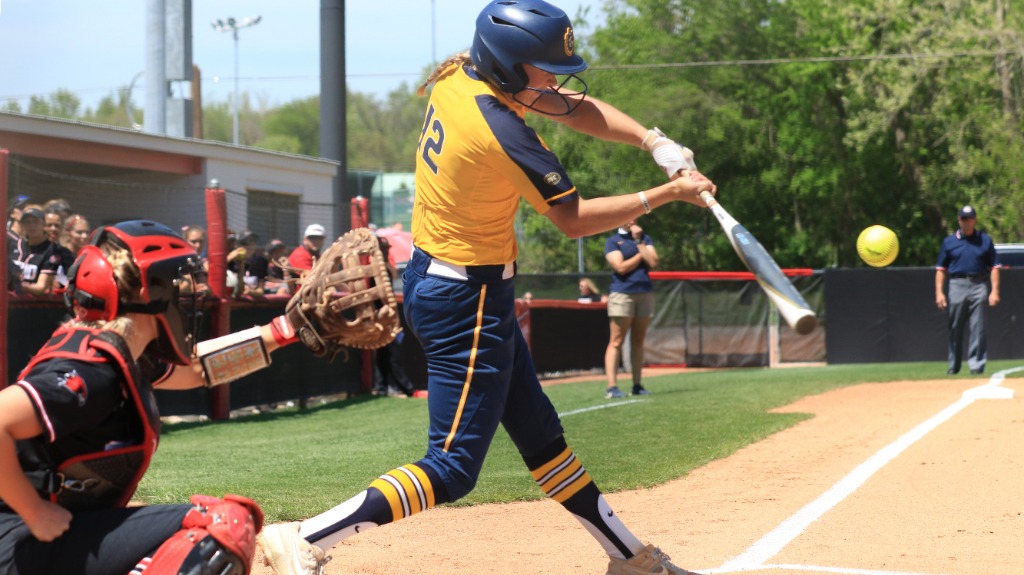 It was a tough weekend for the Murray State softball team as they were swept by SEMO in Cape Girardeau, Missouri, on Saturday, May 1, and Sunday, May 2. The Racers managed to score seven runs against the Redhawks and allowed 11 runs across three games.

Junior right-hander Hannah James was started on the mound for the Racers in game one. She went on to pitch the entire seven inning game, striking out eight batters and allowing just three hits.

The Redhawks gave junior right-hander Rachel Rook the start on the mound for game one. She also pitched the entire game with nine strikeouts in the game and just one hit allowed.

The Racers struggled at the plate throughout the game. They had just one hit in the game with a single from senior center fielder Jensen Striegel in the top of the fourth inning.

The Redhawks also had a slow start offensively until the bottom of the seventh inning. The inning started with a walk by junior right fielder Kaylee Anderson, followed by a single by senior first baseman Ashley Ellis. With both runners in scoring position, freshman outfielder Kimmy Wallen singled up the middles to bring Anderson home, giving the Redhawks a walk-off win in game one. The Redhawks defeated the Racers by a score of 1-0, giving James her tenth loss of the season.

The bats were hot for both teams in game two. Scoring got started in the bottom of the first with Kaylee Anderson hitting a sacrifice fly to left field to bring home senior center fielder Rachel Anderson, giving the Redhawks a 1-0 lead.

The Racers quickly answered in the top of the second with a single from Carroll to bring home senior right fielder Logan Braundmeier and tying the game. Two batters later, freshman catcher Taylor Jackson hit a sacrifice fly to center field to bring  Carroll home, giving the Racers a one-run lead.

In the bottom of the third, Ellis hit a two-run home run to give the Redhawks the lead. The lead didn’t hold for long as the Racers retrieved it in the top of the fourth with hits from Jackson and senior first baseman Lexi Jones. This gave the Racers a 4-3 lead.

The Redhawks tied the game in the bottom of the fourth with a successful sacrifice bunt from Wallen. Following the bunt, Rachel Anderson hit a three-run home run to take a 7-4 lead with three innings left to play.

The Racers made an attempt at a comeback in the top of the sixth inning when freshman designated hitter Bryce Adkinson hit a double to bring in Braundmeier. However, that was the most the Racers could do in the last few innings, dropping game two  7-5.

James got the start for the Racers in game three. She managed to strikeout eight batters through 5.1 innings, but gave up seven hits and a walk. The Racers established a lead early in the top of the first with a single Braundmeier singled to right field to bring home senior shortstop Sierra Gilmore, giving the Racers a 1-0 lead.

The Redhawks tied it up in the bottom of the second with a leadoff home run from Ellis. Later in the inning, freshman second baseman Kynzie Wrigley doubled to right-center to bring home senior third baseman Austin Pauley, giving the Redhawks a 2-1 lead.

In the top of the fourth, the Racers managed to tie the game up with a single from Jackson to bring in sophomore third baseman Lily Fischer. The Redhawks didn’t let the lead stand as Ellis came in and hit her second home run of the game, taking a 3-2 lead.

The Redhawks held off the Racers through the seventh inning and completed the sweep of the series. The Redhawks defeated the Racers by a score of 3-2, giving James her eleventh loss of the season.

The Racers fall to 19-29 on the season and 16-15 in the conference following the sweep. They will head home for their final regular season series on Saturday, May 8, and Sunday, May 9, against Morehead State. Game one starts at 4 p.m.

Show Me MO News Reporters - October 20, 2021
0
This story originally appeared in the Friday, Sept. 25, 1931 issue of The Farmington Press. – EditorBurlin Yates and Charles Vincel, co-captains of the...
© Copyright 2021 All Rights Reserved - Show Me Missouri News - As Amazon Associates we earn from qualifying purchases.
MORE STORIES