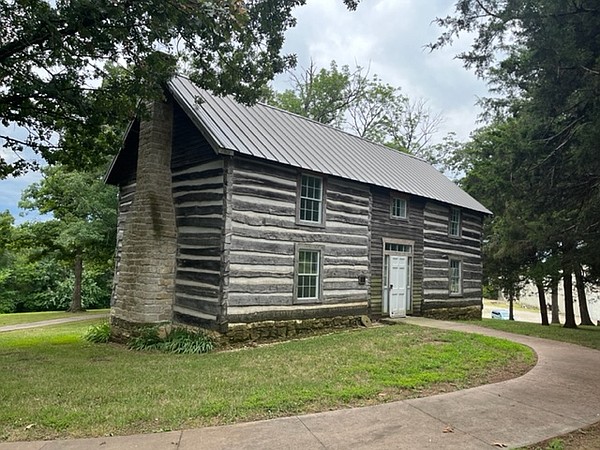 When the Brig. General Heinrich sailed from Port Bremerhaven, Germany, and arrived in New York on Oct. 3, 1836, Joseph Wallendorf and his wife, Elizabeth, and their six children witnessed their first sight of America.
The earliest evidence of the Wallendorf family in Mid-Missouri is listed on an 1838 list of parishioners as members of St. Joseph Roman Catholic Church in Westphalia at which Father Helias served.
County records show on May 3, 1841, Joseph’s son Mathias purchased In-lot 303 and 304 located on the corner of Mulberry and East High, roughly where St. Peter’s playground is presently located. The lots cost $68 and consisted of 104 feet along East High and 198 feet along Mulberry Street. A small house had already been built prior to the time of purchase where the family lived.
During this time in the City of Jefferson, the Catholic church was not officially organized. Mass was said in the various homes until the first log cabin church was built on the site of the present-day St. Peter’s school It is recorded Mathias Wallendorf married Mary Busch on Dec. 26, 1844, at St. Peter’s Catholic Church.
Tragedy would soon strike the family in the late 1840s when the cholera epidemic ran rampant throughout the city for several years; two of their children were stricken and buried in the old St. Peter’s Catholic Cemetery.
Mathias Wallendorf died in 1877 and survivors were his wife, Mary Josephine, and children Catherine, Frank, Jacob, Leo, Herman and Pauline, the youngest. With the death of their mother in 1910, Pauline continued to reside at the home. The census of 1920 and 1930, lists Pauline at the home, however her death was not until July 19, 1949. She is also buried in St. Peter’s cemetery.
While Mathias and family resided in the city, his parents Joseph and Elizabeth purchased land southwest of the city in 1843. This property consisting of 40 acres, Range-West, Section 15, was a perfect lookout point to view the City of Jefferson. During the Civil War, the house was reportedly occupied by Confederate Gen. Sterling Price where he made his decision in 1864 not to attack Jefferson City. Before leaving the home, Gen. Price was said to have paid the family $27 in Confederate currency for his stay with the German family.
The Application for Placement on the National Register stated where the house’s original location was listed when Elizabeth Walllendorf’s estate was settled in 1854.
Joseph and sons, skilled in carpentry, built the two-room, two story, dog-trot style cabin. The cabin flaunted a 10-foot wide, under-cover breezeway through the center. Household chores could be completed out of the weather, used for storage or one could rest in the evening after a long day’s work. The steps leading to the second floor were located within the dog-trot opening. The house was unusual in length and height and built on a native stone foundation unlike many of the cabins of this time period. Throughout the years, improvements were made which included the closure of the dog-trot area and a front central entryway as well as one for a backdoor entryway.
Joseph and Elizabeth lived a simple farm life, with the gardens and fields planted with vegetables and grain for food for the family and livestock. With the death of Joseph in 1851, the remaining children took care of the farm for their mother as was the custom of the time.
After Elizabeth died in 1854, her son Bartholomew bought the property at auction held at the Cole County Courthouse. It eventually became rental property before the City of Jefferson decided to sell it due to the expansion and improvement of West Edgewood and Route 179. Rather than being destroyed, the property was bought in 2004 by the Missouri Farm Bureau, who moved and restored it just a few miles away from the original site. Thus, this property remained in the Wallendorf family for more than 160 years.
Ground breaking for reconstruction of the house began on Sept. 21, 2005, with construction of the foundation and exterior walls shortly afterward. The main contractor was Clifford Wagner of Vienna, who specialized in reconstruction and renovation of historic log homes. The home is equipped in a simple style, displaying home furnishing of the past. Tour groups may be arranged by contacting the Missouri Farm Bureau. It is an especially interesting project to tour for students as they study early American, Missouri or Cole County culture and history.
Anna Knaebel is a Jefferson City native and a freelance writer. She has co-authored Military Memories with Cindy Joannes.