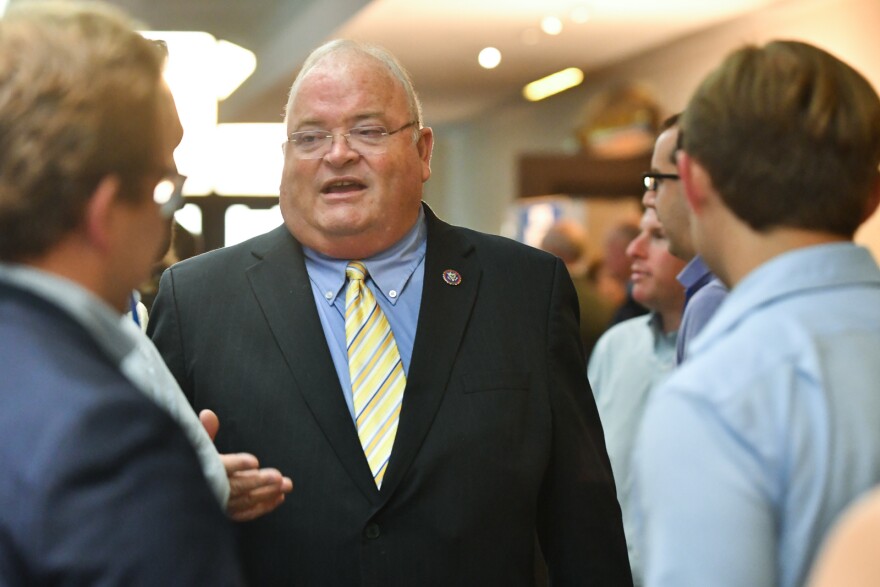 This story is part of a series of profiles on leading candidates for Missouri’s open U.S. Senate race, from the Missouri Independent.

No one seems to be having more fun running for U.S. Senate in Missouri than Billy Long.

The six-term Congressman’s Twitter feed is a parade of shots at his GOP rivals, jabbing Eric Schmitt (who Long refers to as “Chicken Schmitt”), Vicky Hartzler (“Mini Liz Cheney”) and Eric Greitens (“Snidely Whiplash”) for what he feels are a lack of conservative bonafides.

“I mean, I love campaigning,” Long said in an interview with The Independent. “I’ve been to over 40 Lincoln Days. I’ve been trying to get to 114 courthouses, where I go through and I shake hands with the worker bees. That’s me. I was an auctioneer and a real estate broker my whole life. And to be an auctioneer and real estate broker, you got to be upbeat, positive, optimistic.”

But Long’s exuberance hasn’t translated into success in public polls of the race. He doesn’t trust surveys commissioned by his opponents, which put him in single digits, but even Long’s own internal polling shows him trailing.

“When Eric Schmitt polls, he’s the leader,” Long said. “When Eric Greitens polls, he’s on top. And you won’t believe this, but when Vicky’s people poll, she’s the leader. Well, we did a poll ourselves, which was legitimate, and it showed me at 11%.”

But with less than two weeks to go before voters cast ballots on Aug. 2, Long hasn’t lost hope. He knows one thing could turn the tide: An endorsement from former President Donald Trump.

“You know, it looks to me like it’s going to be Sen. Eric, either Greitens or Schmitt,” Long said. “But if he would endorse me, it would be like a bolt of lightning.”

He points to J.D. Vance in Ohio, who was trailing badly in polls in that state’s GOP Senate primary before Trump endorsed him. Now he’s the party’s nominee.

Long was one of the first elected officials to jump on the “Trump train,” a phrase he claims to have coined. When most considered Trump’s candidacy a joke or publicity stunt, Long said, he was all in, touting Trump to foreign leaders and GOP insiders who snickered at the notion that the real estate mogul and reality TV star would be the next president.

Now, after spending years on the “Trump train,” Long hopes the former president will consider jumping on board the “Billy bus.”

“I told him, ‘I need your endorsement to win this thing,’” Long said.

And while the former president hasn’t officially weighed in on the Missouri race yet, he did give a public blessing to Long’s candidacy in March.

Though he said flatly it wasn’t an endorsement, Trump released a statement heaping praise on Long and asking whether Missouri Republican primary voters had given “the big, loud and proud personality of Congressman Billy Long” proper consideration.

“This is a typical Billy Long story. I’m walking through Walmart Neighborhood Market,” Long said. “My phone lights up and it’s Donald Trump. I pick it up and say ‘Yes, Mr. President.’ I’m sure the store manager was like, “Call 911. You guys get over here. We got an old man who looks like a walk away from the nursing home and he thinks he’s talking to President Trump on the phone.’

“He told me, ‘it’s not an endorsement, but you’re gonna love it,’” Long said.

Since then, Trump has publicly said he won’t endorse Hartzler, leaving most thinking he’s deciding between Greitens and Schmitt.

Long isn’t so sure.

Long, 66, is married with two grown daughters. When he looks back at his first run for public office, he said he sees similarities between his experience and Trump’s 2016 campaign.

After a long career as an auctioneer, and a few years as a conservative talk radio host, Long decided to jump into the 2010 race for the Congressional seat being vacated when Roy Blunt decided to run for U.S. Senate.

Long said no one took him seriously.

“It was an eight-way race,” Long said, “and I was supposed to come in ninth. I was the Donald Trump of the race.”

He was pegged as a candidate who was only in the race “for publicity,” Long said, “to help my business and blah, blah, blah, the same things they said about Trump.”

His own campaign consultants told him he was “too fat to put on TV,” he said. “And you can put that in the newspaper. They said, ‘You’re too fat. You can’t go on TV. You’ll scare people.’”

In the end, Long won the primary by around 7.5 percentage points. He cruised to victory that fall, joining a massive class of freshmen Republicans who swept into office in the Tea Party wave.

He says the key to his victory was authenticity.

“I may not look the part,” Long said. “But I guaranteed to voters that I would be the part, that I would do the right thing for the right reason every day. And that resonated with people.”

He hopes that same message will work with voters again in 2022, as he has decided to give up his seat in Congress to once again run to succeed Blunt, who will retire from the Senate after this year.

“Sammy Davis Jr. was my favorite all-time live performer,” Long said. “Saw him three times. He sang a song in 1968 called ‘I’ve Gotta Be Me.’ And that’s what you get with Billy Long. I’m the same guy you’ve got for the last 12 years, which is a very conservative voting record, my head down, doing my work. I’m a workhorse, not a show horse.”

It’s a pitch that’s won him praise, even from those supporting his rivals.

“The guy is just blatantly honest, isn’t he,” Jane Cunningham, a former GOP state senator who has campaigned with Greitens, said of Long. “It is, frankly, very refreshing in my opinion.”

‘Afraid of their own shadow’

Long can tick through a litany of high scores his congressional voting record received from conservative advocacy groups like Club for Growth, the American Conservative Union and Freedom Works. And he vows to continue that if he joins the Senate, with a platform that serves plenty of red meat for conservative voters.

He talks about securing the border, specifically finishing Trump’s border wall and reinstating the “remain in Mexico” policy. He wants voters to be required to show a photo ID to cast a ballot, and he adopts many of the 2020 election grievances that continue to dominate the former president’s public rhetoric.

He complains about the national debt and inflation, and vows to “secure the next generation of farmers” by eliminating the estate tax and pushing to ban foreign entities from purchasing American farmland.

His positions don’t differ much from his Republican rivals for the nomination. But Long insists they can’t be trusted to live up to those promises if elected.

He notes that Greitens used to be a Democrat and Schmitt was considered a moderate in the legislature who voted in favor of allowing foreign entities to own Missouri farmland. And he accuses Hartzler of “voting like a RINO,” a Republican in name only, until she launched her campaign for the U.S. Senate.

“All these people are afraid of their own shadow,” Long said. 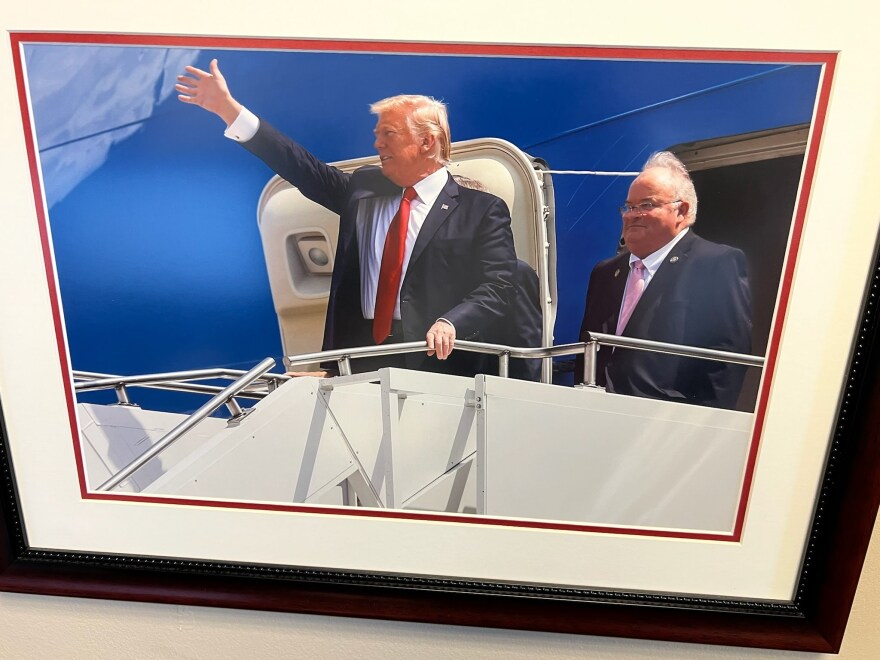 He’s especially worried, Long said, about the prospect of Greitens, Hartzler or Schmitt as the nominee now that former Republican Sen. John Danforth has pledged to raise at least $20 million to help elect an independent Senate candidate this fall named John Wood.

Wood, a Republican and former U.S. attorney who most recently served as senior investigative counsel for the Select Committee to Investigate the January 6 Attack on the U.S. Capitol, moved back to Missouri to run for Senate.

Danforth has dismissed any notion that he’s trying to play spoiler by raising so much money to support an independent candidate, arguing Missouri is ready to support someone who eschews the extremism of both major parties.

But Long believes all Danforth is doing is helping a Democrat win this November.

“I’m very concerned about the shenanigans that the octogenarian John Danforth is pulling running carpetbagger John Wood,” Long said. “He’s Liz Cheney’s attorney on the January 6 committee, and if he follows through and runs, no Republican can win this seat.”

Long said he’s hopeful if he wins the primary, since he doesn’t have the baggage of the other Republicans in the race, that Danforth and Wood will say “Oh, just kidding. We’re not running.”

But Wood and Danforth have been clear. They believe all the major candidates in the GOP primary are too extreme, and regardless of who emerges with the party’s nomination, Wood’s independent candidacy will move forward at full throttle.

A major obstacle Long has faced in his quest for his party’s nomination is the fact that while he has a loyal following in southwest Missouri, he doesn’t have statewide name recognition.

“Billy Long has no traction over here,” said Jeremy Walling, a professor of political science at Southeast Missouri State University in Cape Girardeau, adding: “I’m not sure there’s a lot of awareness of him.”

That’s where a Trump endorsement could make or break his candidacy. Trump is the most popular Republican in the state, winning Missouri twice by double digits and barnstorming across the state for Josh Hawley’s successful Senate campaign in 2018.

But time is running out.

“I’ve shoved all in on Trump,” Long said. “And, you know, I was banking on his endorsements. Still am.”

“But the more days tick off the clock, it looks like it’s probably not coming,” Long added. “So it is what it is. And like I said, it’s not life or death to me. I’m fine. I mean, I’ll go back to my old job if I don’t win this. You know what my old job was? Looking for a new job.”

This story was originally published on the Missouri Independent.