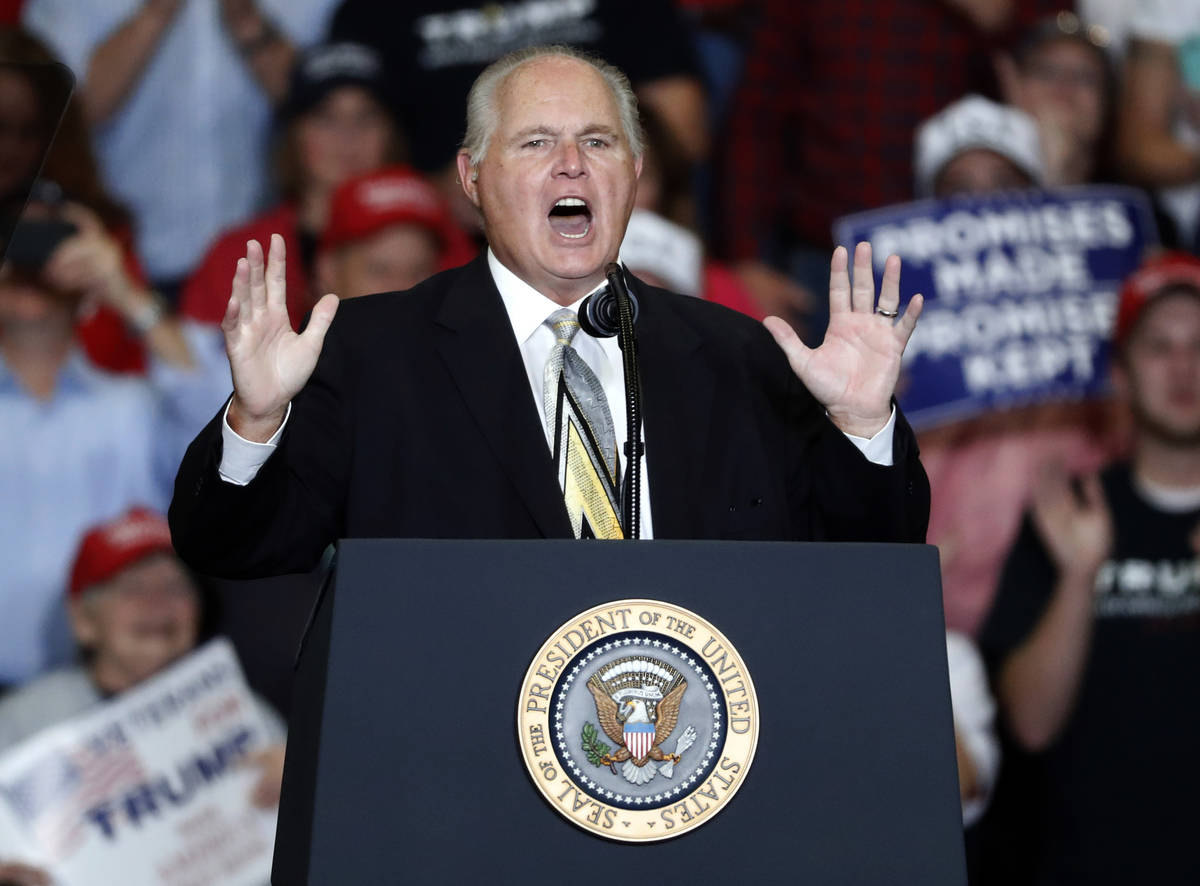 Haters gonna hate. But, for more than 25 years — as I moved around the country, from California to Arizona to Massachusetts to Texas and back to California — I loved listening to Rush Limbaugh.

For millions of listeners, losing the radio host — who died last week after a battle with lung cancer — was like losing their best friend.

I won’t go that far. We’ve lost a great talent who was exceptionally good at what he did. We don’t have to lose perspective, too.

Although this does seem like a good time to point out that even my actual best friends and I don’t agree on everything. I’m old school. Back in the day — before social media taught us to “unfriend” those who think differently — you didn’t have to agree with someone to be their friend. Now you do. It’s another example of how social media destroyed our social skills.

Limbaugh was not always the best person. He had flaws, weaknesses, biases, prejudices and blind spots like the rest of us. He played favorites, identifying with some groups over others. He pushed the fallacy that White men were being discriminated against; the idea that radio should have more female hosts, producers and executives was revolutionary to him. When he talked about “real Americans” who built this country, I got the feeling he meant “white Americans.”

He traded in contradictions. He extolled law and order when bashing illegal immigrants, then morphed into a defense lawyer when MAGA supporters stormed the Capitol. He praised assimilation, then published his bestselling children’s books about U.S. history in Spanish.

Limbaugh sometimes bent what he believed in; he was a free trading devotee of Milton Friedman and William F. Buckley economics who spent his final years defending a Republican president who used tariffs against China to cozy up to labor unions that usually supported Democrats.

Lucid to the end, he nonetheless forgot where he used to stand. In 1994, he was pro-immigrant and defended his buddies, former U.S. Education Secretary William Bennett and the late Housing and Urban Development Secretary Jack Kemp, when fellow Republicans attacked them for opposing California’s Proposition 187, which denied services to illegal immigrants. After 2000, he went with the nativist flow, warning that the borders were porous, that new immigrants were inferior to old ones, and that Democrats were supposedly lenient on enforcement.

When Limbaugh talked about economics, government, generations, human nature or the American Dream, he was brilliant. When he turned his attention to race, immigration, diversity or multiculturalism, not so much.

Amassing a fortune estimated at more than $500 million, the college dropout from Cape Girardeau, Missouri, often personified the best of America. Only in America would his story have been fathomable.

During his 50 years on the radio, he found the heartbeat of the country, but he also lost his way. He was a different person in 2021 than he was in 1991, and — in some respects — I liked the original version better. The old Rush preached that we shouldn’t act like victims; the new Rush encouraged listeners to think of themselves just that way. If you lost your job, and your instinct was to blame a trade deal, an immigrant or a robot, this was the radio show you listened to in order to feel better about yourself.

But, for this journalist, Rush was also my best source. He fed me a daily dose of insight, humor, critical thinking and common sense. He explained a complicated world, and he knew his adversaries in the Democratic Party better than they knew themselves.

One of my editors at a liberal N.Y.-based online publication was mystified. He just didn’t get the appeal. He once asked incredulously: “Tell me again, why do you listen to Rush Limbaugh?” If you have to ask, I’ll never be able to explain. Just know this much: There will never be another broadcaster like him. He didn’t just win the game. He changed it. As legacies go, that’ll work.

By the way, who knew white liberals had so much love in their hearts for people of color? They must. They’re all saying Limbaugh was a “racist.” Listen up, Lefties. We see you. We’ll be holding you to account. We’ll be forcing you to walk it like you talk it, even when it’s not convenient.

It’s how Rush would have wanted it.