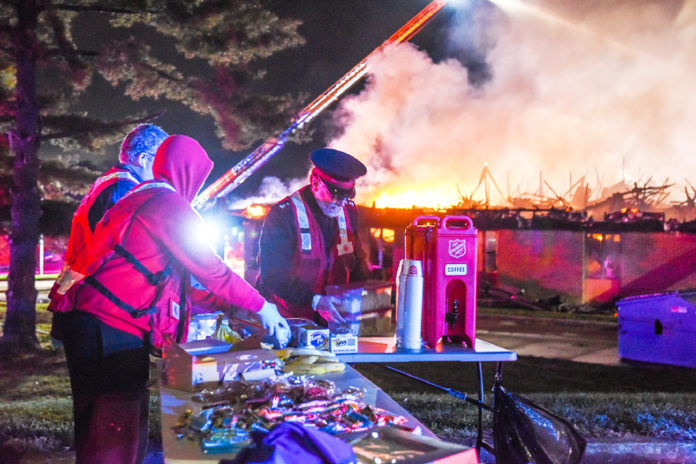 When a large fire destroyed a building housing state offices Monday night on Jefferson City’s east side, a special vehicle was called in to serve the first responders.

The vehicle — the Salvation Army Mobile Canteen — responds to emergencies throughout Central Missouri from its Columbia base.

The Jefferson City Fire Department responded at 8:51 p.m. Monday to the fire at 1621 E. Elm St. With flames streaming from the roof, the fire was well-involved upon arrival, crews said. On Friday, the cause of the fire was listed as “undetermined” because investigators could not determine if the fire originated on the roof or within the attic portion of the structure.

The building housed 80-100 state employees from the Department of Social Services and the Office of Administration’s Information Technology Services Division, who were working to support DSS. No one was in the building at the time of the fire.

JCFD had 21 personnel respond to the fire. Cole County EMS also responded with an ambulance, along with the Jefferson City Police Department for traffic control. An additional 15 JCFD personnel were called in to cover the city and rotate with personnel on the fire scene.

Serving those who provide emergency services, such as those responding to the fire Monday night, has been a way of life for the Salvation Army’s Maj. Curtiss Hartley, who runs the canteen.

Growing up, Hartley’s mother and father served in the Salvation Army and went out to the scenes of disasters in Kansas.

“Being in Tornado Alley meant they were very busy, and I would go along with them to help,” he said.

The canteens go anywhere where fire, police and EMS personnel will have to spend an extended time at an emergency scene.

“It’s equipped as a delivery truck would be,” Hartley said. “We keep it stocked so it’s ready to go at a moment’s notice.”

Hartley said they are working in many communities to develop volunteer teams who will be trained on how to use the equipment on the canteen to take it out whenever it is needed, as quickly as possible.

The Jefferson City Fire Department called Monday night and asked the Salvation Army to bring the canteen in; Hartley said they showed up with water, pastries and granola bars.

“Providing them sustenance to continue taking care of whatever emergency they are dealing with,” Hartly said. “That’s our job.”

JCFD Chief Matt Schofield said their relationships with the Salvation Army and the American Red Cross are critical, especially when they have long-term operations like what occurred Monday.

“They provide for the welfare of our folks at all hours and in all weather,” Schofield said. “They are very much appreciated from all emergency responders.”

Schofield credited JCFD’s chaplain, Sam Powell, for working as the intermediary to get the canteen on the scene.

“He responds to support us and people impacted by a disaster,” Schofield said. “He’s our go-between for humanitarian efforts because after these events there’s still a lot of suffering that has to be addressed.”

Hartley has been serving in the Salvation Army for 40 years and said providing emotional support for responders and those affected by disasters is why he continues to serve.

“Folks, when they’ve been hit with a disaster, need a shoulder to cry on and give them some encouragement,” Hartley said. “That’s a very important part of the service we provide.”

On Monday night, Hartley, Capt. Justin Windell and his son, Eitan, brought the canteen truck down. Hartley said he and Justin are the first two to go to an event if the truck is called out.

They have no official team members right now so if they need more help they call area churches to see if members might be willing to go to a scene.

Those who would like to get involved with helping on the mobile canteen can call the Jefferson City Salvation Army at 635-1975.