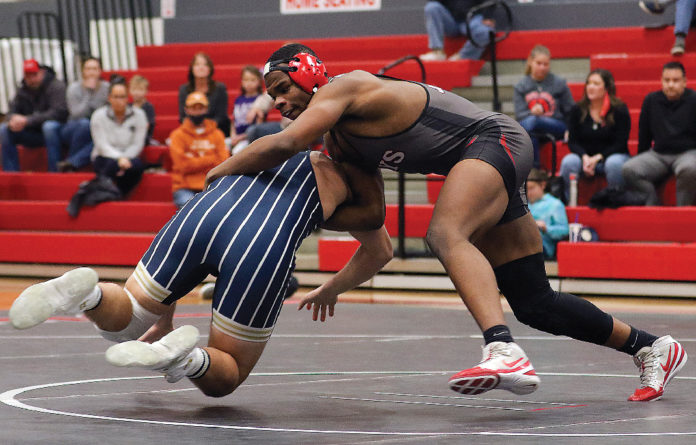 The longest wrestling season will wrap up today.
The Jefferson City Jays are looking to close it out in winning fashion.
“This has been a marathon,” Jays coach Phil Cagle said as Jefferson City will have seven qualifiers in today’s Class 4 state tournament at Cable Dahmer Arena in Independence. “We’ve been working a month longer this year than we’ve ever worked.
“To keep the kids motivated and working hard has been difficult, nobody is used to having go this long. But the kids have adjusted and done what we’ve asked them. This has been one of the most fun years we’ve had. We knew at any time the season could have ended, so we tried to enjoy it as much as we could.”
It’s been a successful season for Jefferson City. The Jays were 15-0 in duals, 28-2 overall counting results in dual tournaments. Jefferson City swept the inaugural Central Missouri Activities Conference regular season and tournament titles, and finished first or second in all of the tournaments it was in this season.
“With everything we’ve had to go through, these kids have had a very good year,” Cagle said. “They’ve handled things very well.”
Jakeil Hayes (41-2) was a district and sectional champion at 195 pounds for Jefferson City. The senior was a qualifier at 182 last season, going 1-2.
By virtue of winning the sectional title, Hayes will have a first-round bye today. He will face either Johnny Daffron (32-6) of Northwest: Cedar Hill or Eddie Angelbeck (30-7) of Fort Zumwalt North in the quarterfinals. Daffron was sixth at 182 in 2020.
Four Jays advanced to state by finishing second in their respective weights at the sectional tournament.
Braden Werdehausen (32-10), a freshman at 120, will face Francis Howell sophomore Cooper Corley (27-5) in the first round. Corley was a qualifier at 106 in 2020.
The winner will take on Seckman senior Devin Haag (15- 7), a qualifier at 120 last year who finished fifth at 106 as a sophomore, in the quarterfinals.
Joe Kuster (41-2), a sophomore at 138. He was 1-2 at 132 at state last year.
Kuster will face Wentzville: Holt sophomore Andrew Peppin (27-5) in the first round. Peppin was 0-2 at 132 in last year’s state tournament. The first-round winner will take on Parkway South senior Jacob Sinn (22-3), who was fourth at 132 last year, in the quarterfinals.
Will Berendzen (39-3), a junior at 170. He will take on Timberland sophomore Ethan Wasson (16-9) in the opening round. The winner advances to take on C.B.C. senior Lucas White (18-0) in the quarterfinals. White as advanced to state at 170 the last two seasons, taking fourth in 2019 and fifth last year.
Brant Aulbur (36-3), a senior at 220. Aulbur, who was third at 220 last year, opens against Blue Springs junior Dominic Howlett (24-11). The winner moves to the quarterfinals against Fort Zumwalt North senior Brendan Mahoney (24-3). Mahoney was 0-2 at 285 last season.
Two Jays finished third in the sectional to advance.
Michael Friederich (40-3), a junior at 182. Friederich, 2-2 at 170 last season for Jefferson City, will face Jackson senior Cole Parker (24-2) in the first round. Parker was 0-2 at 182 last season.
The winner advances to take on Wentzville: Holt junior Cole Bunner (24-2) in the quarterfinals.
Isaac Enloe (38-7), a junior at 285. Enloe will face Blue Springs sophomore Brock Sullivan (29-5) in the opening round. The winner advances to face Washington junior Gavin Holtmeyer (34-4) in the quarterfinals.
“The kids all have winnable matches, it’s going to depend on how they approach it mentally,” Cagle said.
But he didn’t want to project how Jefferson City would do today.
“I don’t like to make predictions, I just want us to do the best we can,” Cagle said. “We’ll take as many medalists as we can get.
“If we go out and wrestle, just get after it, those things will take care of themselves.”
Jefferson City was ninth in the state tournament last season with 52.5 points. Liberty, who has 13 qualifiers this year, captured the 2020 title by nearly 100 points against runner-up Park Hill.
With COVID-19 protocols, the amount of state qualifiers was trimmed from 16 to 12 in each weight class so tournaments in each class could be concluded in just one day.
“Hopefully, it will all be back to normal next year,” Cagle said.
And after years of being in Columbia at the Hearnes Center, then at Mizzou Arena, it’s a unfamiliar venue in Independence.
“We’ll be like chickens with our heads cut off, wandering around and not knowing where to go like we do in Columbia,” Cagle said with a laugh. “But everybody will be the same way.”
Action begins at 9:30 a.m., with the quarterfinals slated to start at 11 a.m. The tournament will conclude with the championship matches at 6:30 p.m.
“It’s been a good year, we just need to cap it off the right way,” Cagle said.