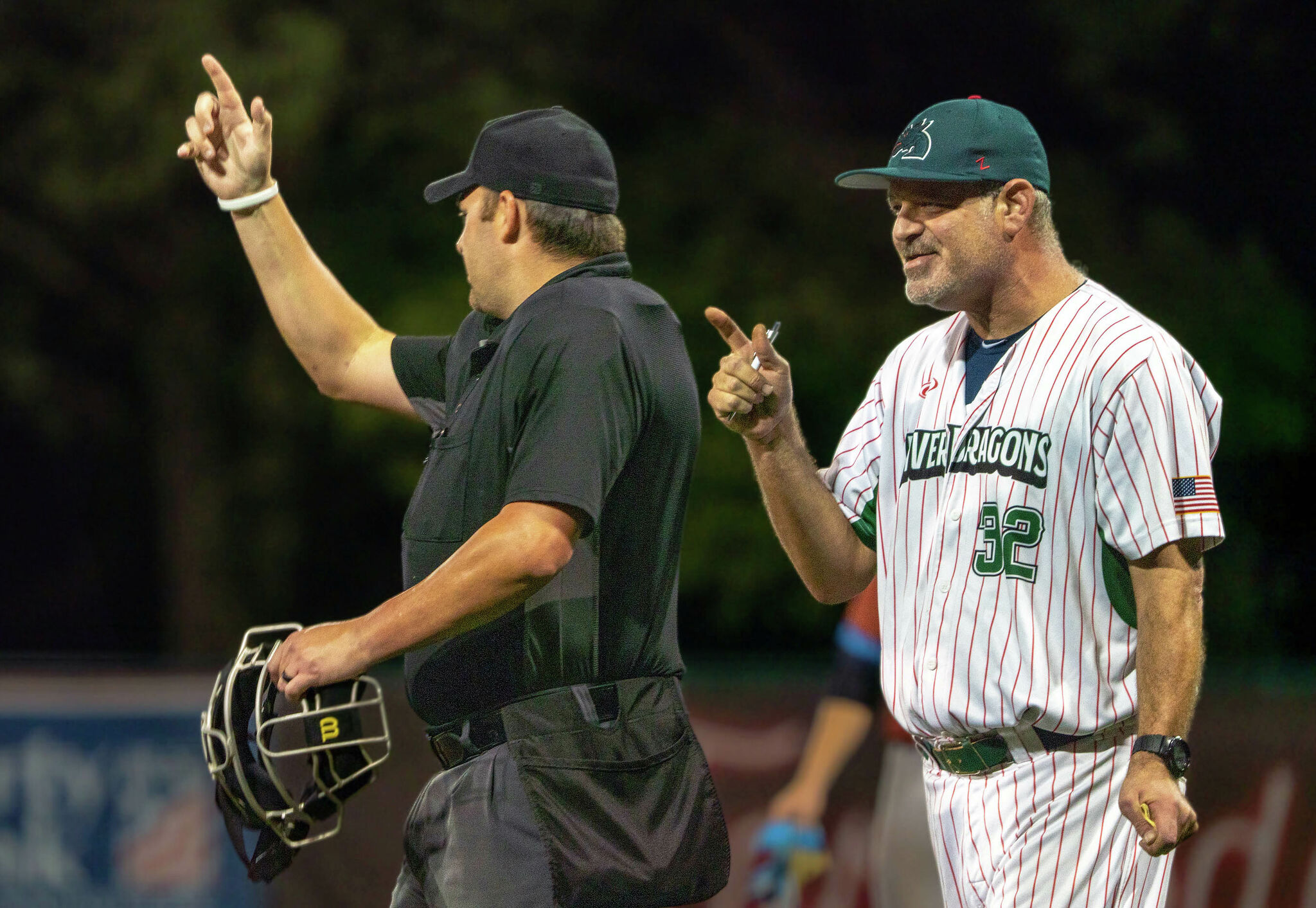 ALTON – In the end, it meant little to the Alton River Dragons, but meant everything to the Springfield Lucky Horseshoes.

And as a result, the Horseshoes will make a return trip to Hopkins Field for all the marbles.

Going into Saturday’s regular-season finales, the Lucky Horseshoes needed a win and the Cape Girardeau Catfish held their fate in their own hands. With a Cape loss at home to O’Fallon (Mo.) Hoots, the Horseshoes won the second-half title and set up Sunday’s division title showdown

The Lucky Horseshoes (27-33 overall, 15-14 in the second half), won their final four games and were 1.5 games behind the Catfish with two games remaining this weekend, needing to win just one of their two games with the Hoots. But O’Fallon crashed the party with two wins and Springfield, which beat Alton 9-3 on Friday at home, came down to Alton and squeaked out a win to win the division by a half a game and extend its season.

The River Dragons were the first-half of the season champions of the Prairie Land Division and with a 32-28 overall record, 14-15 in the second half.

The winner of Sunday’s 6:35 p.m. game at Hopkins Field will take on the winner of the Great River Division title game between the Normal CornBelters and Quincy Gems for the Western Conference title on Tuesday. Should Alton win, it will host the game. A Springfield win will send the Lucky Horseshoes to either Normal or Quincy.

Alton scrapped and clawed and fought until the end Sturday, but stranded runners on first and third to end the game.

“I don’t think it matters it if would be like a preseason game or a scrimmage or just a video game, I think these guys want to fight and they want to compete and they certainly don’t quit,” Alton manager Darrell Handelsman said. “We certainly don’t quit. Our heart and their stick-tuitiveness, whatever you want to call it is so impressive to me and that’s one more reason why I have to stick up for them and I have to fight for them because they’re playing and fighting so hard right now.

“The game really didn’t matter for our standings one way or the other, but I think they just take pride in how they play and I really respect that and I’m really proud of them.”

What could have been a battle to finish the season turned into an unfortunate and egregiously poor decision by an umpiring crew and home plate umpire Aaron Ashlock.

In the top of the eighth with a runner on third and one out, Springfield’s Nolan Self chopped a ball down the third base line. River Dragons third baseman Gunnar Doyle charged the ball and when he realized he would never be able to throw Self out at first and a run would score, stepped aside and allowed the ball to go past him, and the ball bounded foul when shortstop Ethan Kleinheider clearly touched the ball and what should have been ruled a dead ball and foul ball. But Ashlock made no call, did not motion fair or foul and had both teams at the time so confused, but Dawson Johns, who was at third, came in and scored and Self was on first.

Ashlock ruled that Doyle had touched the ball in fair territory and ruled the runner safe, much to the dismay to Handelsman, who would eventually get ejected from the game for not arguing the play but more or less disputing the most obvious of missed calls. Handelsman said he was in the process of being ejected when he was going to play the game under protest, and when he was tossed and Ashlock was walking away from the Alton manager, Handelsman wanted to get in a few more words. That’s when base umpire Preston Childers stepped in and shoved the Alton manager back.

The play gave Springfield a 6-4 lead at the time, a run that turned out to be the game-deciding run and in essence, cheated Cape out of a chance to perhaps gain entry into the playoffs should Alton have come back to win the game. The River Dragons would have eventually tied the game in the ninth had that run not counted and the game gone to extra innings.

“Unfortunately we have seen some things like that,” Handelsman said. “Much to my surprise, they said that Gunnar touched that ball, the bouncer because I kept waiting for his hands to go up and he never put his hands up, the umpire. I asked from the dugout, ‘Is that a foul ball,’ and he said, ‘No.’ And in that period, their runner starts to run back towards home plate, so then Mikey went and tagged him, so I’m assuming he’s out and they called him safe right there. So I went out and asked, ‘Why is he safe?’ And he said, ‘Because he thought it was a foul ball.’ And I said why is that any different that a guy hitting a ball down the left field line, running into second and our shortstop says that ball was foul and it wasn’t and the guy walks off the base and we tag him.

“Would he be out? He said, ‘We’re not talking about that.’ I said but that’s my point, it’s not any different than that, right? … I get he was walking back to home plate, but he has a first base coach standing right next to him and tell him that ball was clearly fair. Obviously (Doyle) didn’t touch the ball, so that was the first surprise. Then like every other time, they just hide behind the warning and then if you say another word, my other word, the first word I said was, ‘I’ and he threw me out before I could finish the sentence that I wanted to protest the game. That was all, there was no more arguing.

“We were at the end and I said if that’s the decision, we would like to protest the game. And that’s when I was ejected. The base umpire put his hands on me, which everybody saw and he tried to say I ran into him. But he grabbed me and forcefully pushed me back, which obviously it’s unprofessional and not acceptable.

“I’ll be the first to take responsibility for my own actions. I didn’t cuss, I didn’t use any bad language. I have to fight and argue for my guys. I think they deserve that. When calls are so egregious when balls are five feet foul and called fair like we’ve seen, it’s hard not to sit there and not say anything.”

Alton did not use pitchers it  will have at their disposal beginning Sunday. Brady Salzman worked five innings and Mikey Hampton relieved the final four innings.

“Brady Salzman has been just a blessing to find him when we did,” Handelsman said. “He’s been just outstanding, tonight’s results regardless. But to even give us five innings and (allow) four runs kept us in the game and we scored some runs there. And then what do you say about Mikey Hampton. He’s just a competitor. I would take him on my team any kind of game or sport or competition. He doesn’t quit, he doesn’t back down to anybody.

“Right there, we had a chance to win the game in the ninth inning, what else do you expect? After 60 games of seeing us play, I wouldn’t really expect to see anything different.”