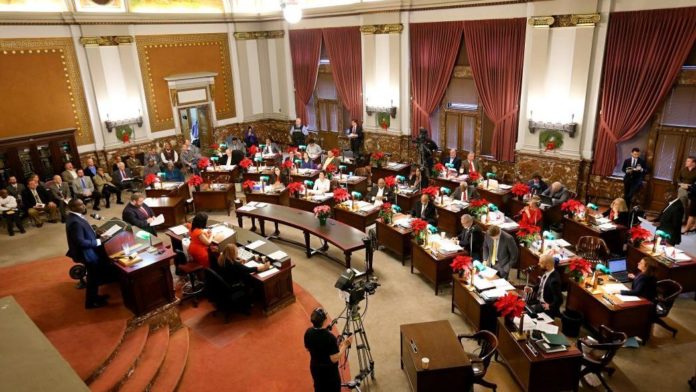 Ameren spent $34 on lunch for recorder of deeds Michael Butler in 2020, according to the Missouri Ethics Commission.Rep. Donna Baringer, a St. Louis Democrat who served 14 years as a member of the board of alderman, said it was unclear whom the legislation covers.“There are some serious clarifications we need to make,” Baringer said.And, she questioned why it only applied to the city.“Sometimes if you take too big of a bite, it’s hard to get something passed,” Wiemann said. “I thought it would be easier to start with one city.”Others were against putting limits on length of service.“I don’t like term limits,” said Rep. Raychel Proudie, D-Ferguson.Wiemann’s legislation marks the latest attempt in the state Capitol to impose ethics standards on local officials.Rep. Shamed Dogan, R-Ballwin, has previously introduced a local official lobbyist gift ban but it has not advanced in the Legislature.Although Wiemann is targeting St. Louis officials, mayors in other parts of Missouri also are wined and dined.Kansas City Mayor Quinton Lucas received $1,000 in free football tickets to watch the Kansas City Chiefs last year.