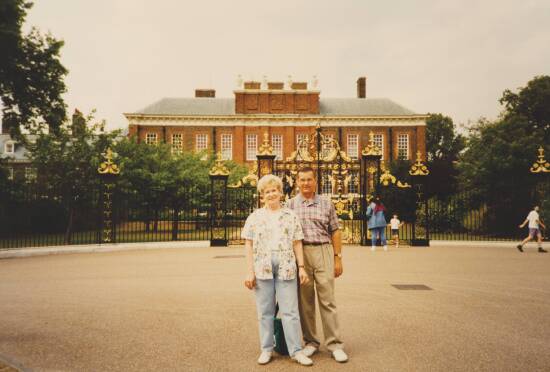 Leon and Linda Wiggs stand outside their Cape Girardeau home on Tuesday, July 19, 2022. Leon and Linda have spent years traveling the world.

Leon and Linda Wiggs glance at the cabinet in their living room and see England, China, Alaska, Spain and Scotland; each destination lives in objects purchased on the couples travels around the world. Linda says when she looks at the vases, figurines and paintings around her home, she instantly sees her memories from each place shes visited. She says although she cant recall every trip and every activity they did, she still remembers. Every trip has a way of staying with the couple.

One day, I looked at Linda and said, You know what, weve worked 40 years. Lets get out of here, and lets travel the world, Leon says.

And so, they did. Leon and Linda downsized to a smaller house and began traveling for at least six to eight months out of the year for 14 years.

Before they retired, the couple took multiple bus tours around Europe and a few road trips across North America. The couple says their first big trip during that time was a road trip to California, and their first international trip then was a tour of England, Scotland and Wales.

After retirement, the couple could not stop traveling. During those 14 years, Linda says they took one or two international trips during the summers, then traveled in their RV to Florida and Texas during the fall and winter months. They took so many cruises during this time, they lost count.

Every time we went somewhere, there was somewhere else we wanted to go, Linda says.

Linda and Leon Wiggs outside Kensington Palace in London, England. After working for more than 40 years, they decided to downsize their house and spend six to eight months each year traveling. (Photo submitted by Linda and Leon Wiggs)

The couple experienced the world on and off the water. They cruised through the Panama Canal three times. They cruised across the Atlantic Ocean. They cruised from England to Russia, from Greece to Turkey, and all throughout Europe and the Caribbean. Then, they took to land in their RV, staying in RV parks in Florida or Texas for months at a time.

Leon and Linda forged a routine out of their traveling habit. The couple started their year at an RV park in Texas for three months, then theyd travel out West, then take a cruise or go home for a few months until their international trip in the summer. Once October hit, Leon and Linda got back in their RV to head for warmer weather in Florida. Theyd stay in the Sunshine State until two weeks before Christmas, which theyd spend back home with family.

Leon and Linda felt like they had another family when they stayed in RV parks. Linda says the RV tenants gathered to talk almost every night, host happy hours or cook their weekly Friday potluck dinners. At the Texas RV park, Linda says someone would grab leftover cabbage from a nearby cabbage-cutting farm, and Leon would cook it. Sometimes, the group of RV tenants went into town for pizza and sat at a big table together, just like family. Leon says in RV parks, they met every type of person available from all different backgrounds, but Linda says, as an RV family, they were all alike.

Get our Daily Headlines

Sent right to your inbox.

During their 14 years of traveling, Leon and Linda experienced many challenges. In Spain, their tour bus company went on strike, and they got stuck in the city of Seville. The couple didnt have a hotel to stay in, and they worried about missing their flight back to the United States. Luckily, their tour guide was able to call someone at the last minute, and the couple got to fly out on a little, first-class two-engine plane.

On the couples first trip to Scotland, Linda says she got lost in a castle with her friend for a whole day. Their husbands wandered off alone, exited the castle and waited outside for their wives. Linda and her friend wandered around the massive castle for hours before finally finding the exit.

If you stay home, you have the same experiences over and over again, [but] if you travel, every day is a new experience, Linda says. 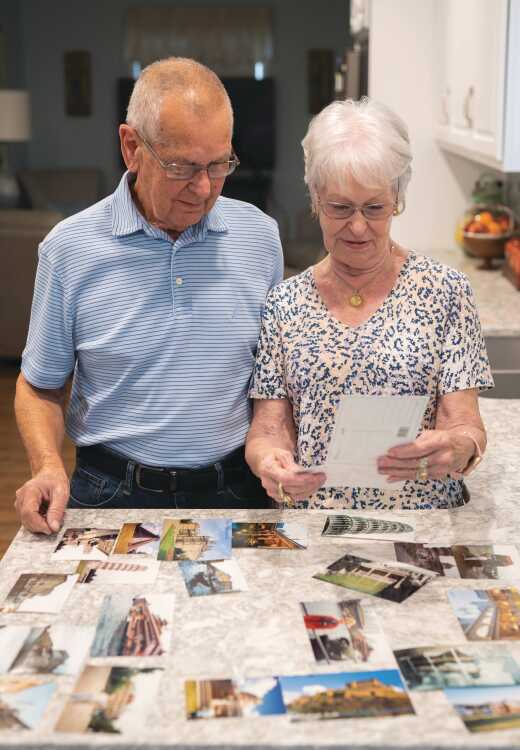 Leon and Linda Wiggs look through photos and postcards from their travels. They have explored the world by land, sea and RV.

Despite all of their crazy adventures, Leon and Linda still agree its the people that make traveling so memorable. They have continued to correspond with multiple people theyve met on trips, people they knew theyd never see again.

Leon says he talked to the head of the Orthodox Church for half an hour at a hotel in Greece. Linda says they also met a wealthy banker at that hotel who claimed to have known Jackie Onassis, former first lady of the United States.

In [our] hotel in Greece, so many people would come in and just sit down, and wed end up [saying], Well, lets have a cup of coffee, and wed talk about their life and our life. We made so many friends with people who we knew wed never see again, Linda says.

About four years ago, Leon looked at Linda on one of their trips back in the RV and said it was time to settle down. Linda agreed. So, the couple quit traveling  or somewhat quit traveling  and moved into a home at a retirement community in Cape Girardeau.

Despite the couple selling their RV and settling in Cape Girardeau, they still cant stay away from cruises. After multiple cruise cancelations due to the pandemic, the couple finally has a cruise planned for November. At a smaller scale, their adventures will continue, and the grand adventures they had will continue to live on in their home and memories.