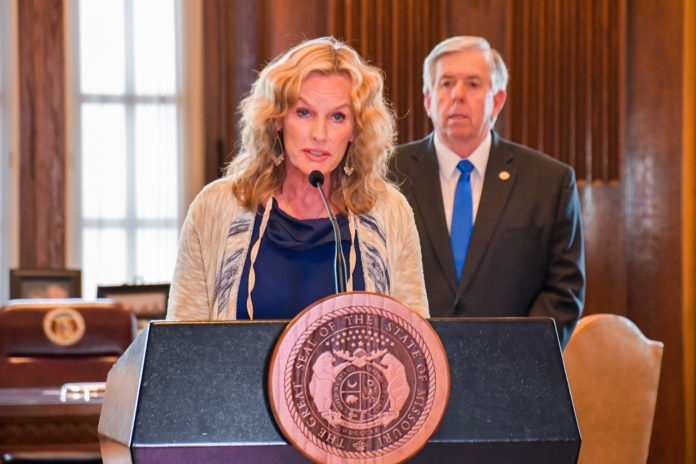 As Gov. Mike Parson was in Rocheport earlier this month participating in the ceremonial groundbreaking for a new bridge, his chief of staff was back in Jefferson City showing a member of his cabinet the door.

The Oct. 12 departure of Sarah Steelman as commissioner of the Office of Administration marked the third time in six months that a member of Parson’s cabinet was let go suddenly and without any public explanation.

And just like the previous two — former Health Director Randall Williams and COO Drew Erdmann — Steelman was asked to resign effective immediately, and her resignation letter is being withheld from public disclosure.

In addition to Steelman, the governor also replaced the general counsel for the Office of Administration, which is the agency that handles contracts and purchasing for state government.

Caroline Coulter, who is still listed online as working in the governor’s office as of Monday morning, has replaced Jim McAdams, who served as general counsel for the Office of Administration for the last four years after decades working in state government.

The turmoil within the Parson administration, and the lack of transparency, is concerning, said House Minority Leader Crystal Quade, D-Springfield. But it’s especially troubling, she said, now that it involves the state’s purchasing agency.

“All of this happening with no public explanation is a giant red flag,” said House Minority Leader Crystal Quade, D-Springfield. “And when it’s the state agency that handles contracts, at a time when there are lots of questions about no-bid contracts and state spending, the way the governor is handling it just fuels conspiracies.”

One Republican close to the governor, who asked for anonymity to speak candidly, put it more bluntly: “Moves like this make it look to those on the outside like the wheels are coming off. And, frankly, a lot of the time that’s how it feels on the inside, too.”

A spokeswoman for the governor, Kelli Jones, did not respond to requests for comment on the changes at the Office of Administration.

Asked about Steelman’s departure by the nonprofit news site The Center Square, Parson chalked it up to moving on from cabinet members who were holdovers from his predecessor, former Gov. Eric Greitens.

Steelman has been replaced by Ken Zellers, who was hired in 2017 under Greitens to serve as chief operating officer of the department of revenue. He was promoted to director of that agency in 2019.

Parson didn’t explain why Steelman, who he told Center Square had been “a friend a long time,” was let go abruptly while he was away from the Capitol.

“When you are an at-will employee and you work for the governor,” Parson said, “changes are going to be made.”

After news broke that she was leaving, Steelman told The Independent that she was called into the office of Parson’s chief of staff, Aaron Willard, and asked to resign.

She did not offer any further details.

Some Democratic lawmakers have publicly speculated whether Steelman’s departure was connected to the discovery of a security flaw in a website operated by the Department of Elementary and Secondary Education. Information technology for the state government is housed within the Office of Administration.

But it appears from publicly available records that wasn’t a factor.

A Post-Dispatch reporter discovered that Social Security numbers for teachers, administrators and counselors were visible in the HTML code of a publicly accessible website. The newspaper informed the state of the problem and promised not to publish any story until the issue was fixed.

Two days later, Parson publicly accused the newspaper reporter of being a hacker and vowed to push for criminal prosecution.

Steelman was asked to resign by Parson’s chief of staff the morning of Oct. 12. According to emails obtained through a request under Missouri’s Sunshine Law, the state education department wasn’t made aware of the security flaw by the Post-Dispatch until later that morning.

Speculation has also swirled around the fact that Steelman’s departure came a few months after her husband had a public falling out with the governor over the actions of lobbyist and Parson adviser Steve Tilley.

David Steelman, a longtime member of the University of Missouri Board of Curators, raised objections about Tilley using his job as lobbyist for the university to seek business for his other clients. He expressed concern that if he didn’t “play ball” with Tilley that he’d lose his seat on the board of curators.

Parson demanded David Steelman resign after the concerns became public. When he refused, the governor appointed a replacement for him on the board after the legislature adjourned for the year, avoiding what promised to be a tough confirmation battle in the Missouri Senate.

In addition to Steelman’s departure from the Office of Administration, Parson announced last week a number of shifts in his cabinet, including naming his deputy chief of staff, Robert Knodell, as acting director of the Department of Social Services.

Knodell resigned from the governor’s office to take the new job. Parson’s office is also refusing to turn over his resignation letter.

“No record shall be provided,” the governor’s office said in response to The Independent’s request for both Knodell and Steelman’s resignation letters under Missouri’s Sunshine Law.

Prior to this year, resignation letters were routinely made public following the departure of department directors.

The Independent’s Tessa Weinberg contributed to this story.