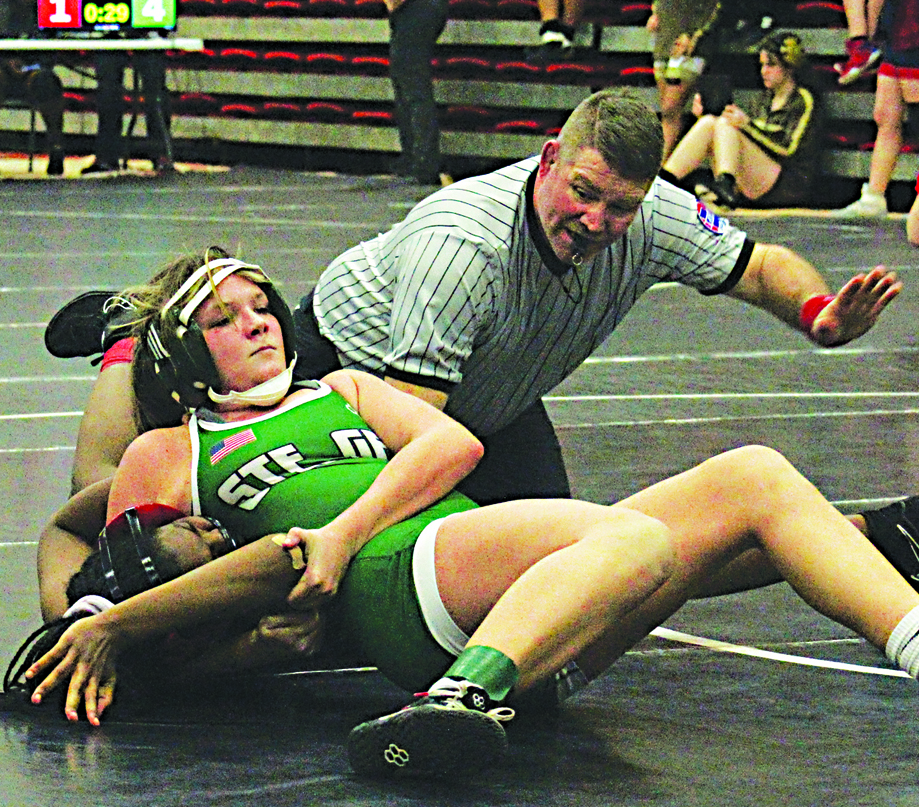 CAPE GIRARDEAU, Mo.  —  Hailey Wheeler claimed the only conference championship for the girls, and Katlynn Lay finished as runner-up as the Dragons took fourth place at the SEMO Conference wrestling tournament at the Terry Kitchen/Tiger Fieldhouse at Cape Central Jr. High on Saturday (Jan. 21).

Wheeler was all smiles as she celebrated with teammates and coaches after she pinned Sikeston’s Shanell Williams at the 53-second mark of their 145-pound division. She watched the video of her victory with the team managers after her celebration.

In the process, Wheeler prevented Sikeston from winning the team championship with the win. She scored 28 points total after she pinned both her semifinal and finals opponents.

Lay (130) also reached the finals, falling to Sikeston’s Kimarhri Wilkins at the 2:53 mark. Lay pinned her semifinal foe to reach the championship bout. She scored 20 points on the day.

Park Hills Central won the girls’ team conference championship with 114 points, followed by Sikeston (113) for second, Jackson (109) third and Poplar Bluff (102) to round out the top five.

The girls’ field was only one day compared to the usual two days for the boys.

The teams in the girls conference are still seeing participation grow for the ladies. Some brackets barely had enough to even hold competition. The 100- and 190-pound divisions only had three wrestlers compete as those girls had to wait till the very end of Saturday to compete as they had joined the team from the beginning

The 125 bracket had the most with eight participants, including Geiler.

Cape Central Jr. High is the school’s old high school until the mid-2000s.

The Dragons were scheduled to compete last Tuesday (Jan. 17)  against conference rival Cape Girardeau Central Tigers. However, the Tigers only fielded one girls’ wrestler and Ste. Genevieve was open at that weight division so there was no need for the Lady Tigers to come to town. It will not be rescheduled.

The Dragons head back to Cape Girardeau at 5 p.m. Tuesday (Jan. 24) for a quad-match with the host Notre Dame Bulldogs, Herculaneum Black Cats and De Soto Dragons.

Ste. Genevieve sophomore Hailey Wheeler claims the SEMO Conference champioship as she pins Sikeston’s Shanell Williams after the referee slaps the mat during their finals match at Cape Girardeau (Mo.) Central Jr. High on Saturday (Jan. 21). Wheeler was the only girl to win the league title for the Lady Dragons. (PHOTO BY MICHAEL BOYD JR./HERALD SPORTS EDITOR & PHOTOGRAPHER)

Director of Creative Services and Marketing, Director of Sales And Multimedia Journalist